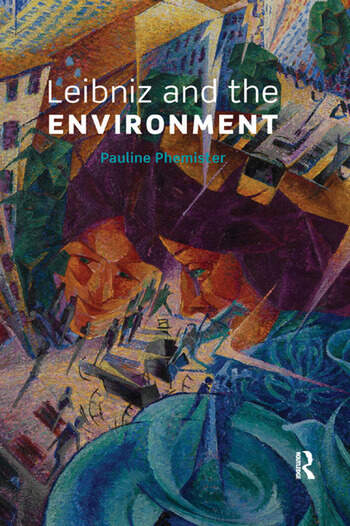 The work of seventeenth-century polymath Gottfried Wilhelm Leibniz has proved inspirational to philosophers and scientists alike. In this thought-provoking book, Pauline Phemister explores the ecological potential of Leibniz’s dynamic, pluralist, panpsychist, metaphysical system. She argues that Leibniz’s philosophy has a renewed relevance in the twenty-first century, particularly in relation to the environmental change and crises that threaten human and non-human life on earth.

Drawing on Leibniz’s theory of soul-like, interconnected metaphysical entities he termed 'monads', Phemister explains how an individual’s true good is inextricably linked to the good of all. Phemister also finds in Leibniz’s works the rudiments of a theory of empathy and strategies for strengthening human feelings of compassion towards all living things.

is essential reading for historians of philosophy and environmental philosophers, and will also be of interest to anyone seeking a metaphysical perspective from which to pursue environmental action and policy.

Pauline Phemister is Reader in Philosophy at the University of Edinburgh, UK. She is author of Leibniz and the Natural World and The Rationalists: Descartes, Spinoza, and Leibniz. Among her other books is a co-edited interdisciplinary volume Human-Environment Relations: Transformative Values in Theory and Practice.

"At the time of the ecological crisis, this book by Pauline Phemister actualizes in a relevant and lively way one of the most original thoughts of our philosophical tradition."

'This richly productive engagement with "environmental philosophy" as such, so to speak, attests to its much earlier presence in western thought than many ecological thinkers have noted. (...) Especially impressive […] are Phemister's inquiries into fundamental questions of human ontology, which run like a thread throughout the text. (...) Compelling in this book for this reader is Phemister's way of bringing Leibnizian analyses into conversation with such innovative and challenging twenty-first-century thinkers as Jane Bennett, Gilles Deleuze, and Bruno Latour.'

"This book offers a new reading of themes associated with the philosophy of Leibniz."

"We are fortunate…to have as our guide a scholar whose acquaintance with the Leibnizian corpus is second to none.(...) Completing the ‘introductory’ section of the book there is, first, an admirably succinct yet accessible outline of Leibniz’s philosophy. (...) Environmentalists, even those who whole-heartedly endorse both of Phemister’s starting-points, might not naturally think of Leibniz as their first point of call. Yet, as Phemister convincingly demonstrates, there are many key elements of a satisfactory metaphysics to be extracted from Leibniz’s philosophy. Even those who baulk at embracing the whole package will nowhere find a more challenging and satisfying medium against which to test and temper such diverging metaphysical beliefs as they wish to retain, than in this volume.’

"Phemister seeks in the great philosophical texts of the past a set of metaphysical assumptions that could help us care more about the well-being of other species. (...) Leibniz and the Environment offer[s] new perspectives on the metaphysical consequences of aesthetic pleasure and encourage[s] further discussion of Leibniz’s moral philosophy, often underestimated in contemporary scholarship."

- Raphaële Andrault (2017): Leibniz and the environment, British Journal for the History of Philosophy

"[Phemister] demonstrates virtuoso mastery of Leibniz's thought and related secondary literature and provides both an ample bibliography and a valuable survey of the reception of Leibniz's system in German, French, and Anglo-American philosophy. Particularly interesting in this regard is discussion of the impact of Leibniz on the natural philosophies of Wolff, Kant, and Baumgarten and on the process philosophy of Alfred North Whitehead."