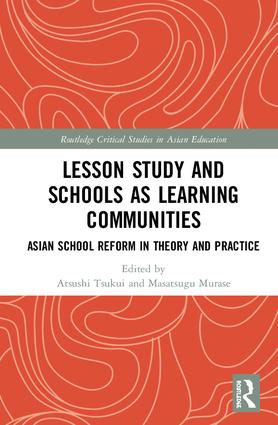 School as Learning Community (SLC), or Lesson Study for Learning Community (LSLC) represents an approach to lesson study that emerged in Japan in the 1990s and which has been studied intensively by educators and researchers worldwide to establish democratic learning communities for teachers and students in schools. The model, which involves all teachers in a school observing and sharing a lesson together, creates a listening pedagogy to embrace and develop diversity of learning in each teacher and student – a practice that is as yet, not commonly researched in Asian countries outside of Japan. The book’s theoretical foundation reviews existing literature on SLC and LSLC in the Japanese contexts of educational theories and practices. The chapters discuss patterns of learning practices and the challenges of conducting LSLC in Japan, Taiwan, Korea, Indonesia, and Vietnam. Recommendations for research and practice involving SLC/LSLC are also provided in the book with a key focus on the impact of lesson study on school reform policies.

Part I Theory of SLC

Chapter 7 What Makes a Teacher ‘Act’: Changing the Micro-politics of Classroom Observation through Lesson Study in Vietnam (Atsushi Tsukui)

Atsushi Tsukui is senior researcher at International Development Center of Japan, a consulting firm for social development projects in developing countries. His research focuses on teacher professional development in Japan, Vietnam, Indonesia, Ethiopia and Myanmar. He develops and conducts a series of teacher training by video viewing. His earliest work anthropologically revealed the roles of facilitators for community education in Northern mountainous regions in Vietnam. In subsequent research he conducted in-depth fieldwork of teacher’s lived experiences in Vietnamese schools to investigate teacher value/identity. He is now engaging in his doctoral thesis on Vietnamese teachers’ values reflected in their classroom observation.

is the founder and director of Azabu Institute of Education, an independent consulting firm in Tokyo, Japan. After gaining experience as a teacher educator at Shinshu University, he became an independent consultant for school education. He has visited numerous schools in Japan and other Asian countries to assist in their school reform efforts. In addition to consulting, he has authored or co-authored several papers and books on diverse subjects, such as learning science, lesson study, professional development, and school reform. He is currently working as part of a JICA project for curriculum development in Myanmar.