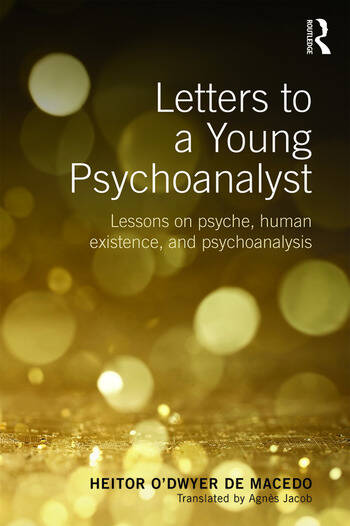 Written in the form of letters from an experienced analyst to a young colleague, Letters to a Young Psychoanalyst expands the psychoanalytic frame to include South American, French, and British theory, and examine a wide variety of theoretical and clinical topics.

Letters to a Young Psychoanalyst

is ground-breaking in more than one respect. It re-examines major psychoanalytic theories in the light of rich clinical practice, and in the light of the practice of friendship, whilst portraying the practice of analysis as the choice of a personal code of ethics. Covering such core issues as transference, trauma, hysteria, the influence of the mother, and love and hate, and drawing on the work of notable analysts such as Winnicott, McDougall, Pankow and Ferenczi, the book explores the many facets of healing function of psychoanalysis in practice and discloses the workings of the psyche in human existence.

This book considers psychoanalysis a humanist endeavour, focussing on its healing function and using captivating examples to illustrate different modes of commitment on the part of the analyst. Rejecting a view of psychoanalysis as a painful and laborious process, the book insists instead on the joyous and passionate nature of the work of psychic elaboration. Uniquely, the transmission of knowledge and skill which it provides, constituting a veritable training, is not at all didactic in tone. It places the two interlocutors, as well as the reader, on the same level: people who share the desire to remain attentive to themselves and to others, and who believe that empathy heals, within the setting of therapy and in human relations in general.

Written in a remarkably engaging and accessible style, Letters to a Young Psychoanalyst will appeal to psychoanalysts and psychoanalytic psychotherapists, students of all levels studying in these fields, as well as lay readers wishing to understand fundamental psychoanalytic concepts.

Introduction. 1 The Interlocutor. 2 The Young Psychoanalyst. 3 The Setting. 4 Françoise Dolto and Psychoanalytic Amorality. 5. Couch or Chair. 6 Transference. 7 The Ferenczi Predicament. 8 Psychosis: The Encounter with Gisela Pankow. 9 Gisela Pankow and Her Teaching. 10 Winnicott’s Concept of Continuity of Being: Transference and the Treatment of Trauma. 11 Reading Beyond the Pleasure Principle: the Insistence of Eros. 12 Helio Pellegrino. 13 Humour. 14 Paranoia as Seen by Philippe Réfabert. 15 The Player. 16 Freud, Michel Neyraut, Piera Aulagnier: Anxiety between Theory and Practice. 17 Perversion and Somatisation: the Work of Joyce McDougall. 18 Money. 19 Transference and Friendship. 20 Hysteria. 21 The Therapist. 22 Victor Smirnoff: an Example to Follow. 23 Françoise Davoine and Jean-Max Gaudillière: History Beyond Trauma. 24 Winnicott’s Contemporaneity and Psychoanalytic Societies. 25 Psychic Health. 26 Trust 27 The Divine Part of Man. 28 Loup Verlet: Psychoanalysis as a Revolution of the Conceptual Framework. 29 The Inner Mother. 30 Writing. 31 Hallucination as a Defence and Claude Lanzmann’s Triple Knowledge. 32 Totalitarian Regimes and Psychosis. 33 True Love. 34 Hate. 35 The Celestina Superego and the Dulcinea Superego. 36 Freud and Spinoza. Appendices

Heitor O’Dwyer de Macedo is a French psychoanalyst and former theatre director of Brazilian origin, based in Paris.

"In the simplest and most accessible manner, this French psychoanalyst-who used to be a theater director in his native Brazil--clearly and irrevocably demonstrates how the Freudian unconscious remains an invaluable tool for all psychotherapists to make their patients understand and deal with our world's terrors, as well as its joys."-Edith Kurzweil, Editor of Partisan Review, New York.

"I want to emphasize the practical usefulness of this book, which was very helpful to me in my psychiatric practice and in my work with psychotic patients. The fact that it describes many different universes and modes of expression of the unconscious encourages us to see the dynamic character of our daily practice."-

"What makes these Letters essential reading is the generosity with which the author shares his internal world and his interest in the "living being".With great honesty and gratitude, he poses the question of what makes someone a true psychoanalyst, whilst also looking at what sometimes prevents us from fulfilling this function."-

"In the form of letters, the author deploys, with sensitivity, originality and precision, his art of accompanying a young psychoanalyst in her questioning about clinical practice. He exercises this art in resonance with inventive, open-minded analysts who ventured beyond Freudian territory to explore the encounter with the unprecedented, trauma, sexuality; the manner in which the questions raised, all of them timely, are reformulated communicates to the reader the joy engendered in an analysis and in life by the invention of a new frame of thought."-