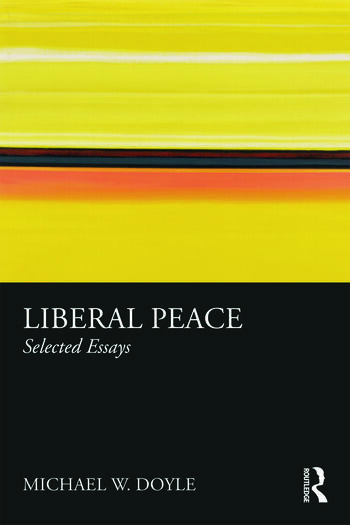 The volume begins by outlining the two legacies of liberalism in international relations - how and why liberal states have maintained peace among themselves while at the same time being prone to making war against non-liberal states. Exploring policy implications, the author focuses on the strategic value of the inter-liberal democratic community and how it can be protected, preserved, and enlarged, and whether liberals can go beyond a separate peace to a more integrated global democracy.  Finally, the volume considers when force should and should not be used to promote national security and human security across borders, and argues against President George W. Bush’s policy of "transformative" interventions. The concluding essay engages with scholarly critics of the liberal democratic peace.

This book will be of great interest to students of international relations, foreign policy, political philosophy, and security studies.

Michael W. Doyle is the Harold Brown Professor of International Affairs, Law, and Political Science at Columbia University. He is author of many books, including: Empires (1986); Ways of War and Peace (1997); and Striking First: Preemption and Prevention in International Conflict (2008). He is a former special adviser and assistant secretary-general of the United Nations and currently chair of the Advisory Board of the UN Democracy Fund.

‘Readers will not find a better guide to liberal internationalism and its theoretical rivals than this collection of [Doyle’s] writings from the past three decades.’ -- G. John Ikenberry, Foreign Affairs

'Michael Doyle has been our intellectual leader in connecting the strands of liberal peace theory – institutions, ideas, and transnational ties – in light both of classical political philosophy and contemporary empirical reality. This collection of his essays, with a new introduction and conclusion, represents a major statement of his position as well as a handy volume bringing together a number of his important essays.' - Robert O. Keohane, Princeton University, USA

'Ronald Reagan, Bill Clinton, and George W. Bush extolled the peaceful virtues of democracy, but the track record is mixed. In this thoughtful book, Michael Doyle sorts through the arguments in a convincing manner, and makes a powerful case for a liberal peace. This book demonstrates yet again why Doyle is one of today’s leading theorists of international affairs.' - Joseph S. Nye, Jr., Harvard University, USA

'Rarely has a series of academic essays so profoundly influenced theoretical debate, empirical research, and foreign policy as those collected here. Drawing on seminal ideas from Immanuel Kant's Toward Perpetual Peace, Michael Doyle examines the relationship between liberalism and peace, develops its policy implications, and responds to critics. This collection of his path-breaking essays on liberal peace is sure to be a classic.' - Pauline Kleingeld, University of Groningen, the Netherlands

‘Michael Doyle's research has educated an entire generation of scholars and policy-makers as to why liberal states enjoy peace among themselves, but also why they are tempted to engage in war against non-liberal states. This volume is essential reading for all those seeking to understand the on-going debate between liberals and their critics, as well as the important differences among contemporary liberal thinkers on issues of peace and war.’ - Jennifer M. Welsh, University of Oxford, UK

'Readers will not find a better guide to liberal internationalism and its theoretical rivals than this collection of his writings from the past three decades.' - G. John Ikenberry, Foreign Affairs, Vol. 91, No. 3. May/June 2012