Life as a Weapon
The Global Rise of Suicide Bombings 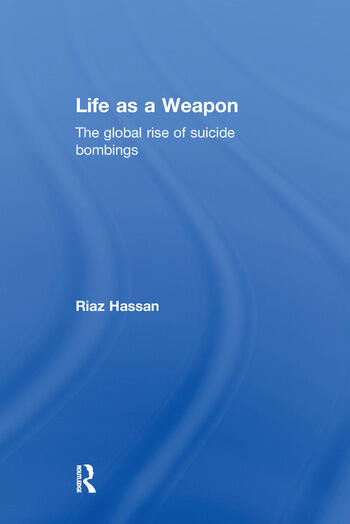 Life as a Weapon: The Global Rise of Suicide Bombings

Suicide bombing has become a weapon of choice among terrorist groups because of its lethality and ability to cause mayhem and fear. But who carries out these acts, and what motivates them? By undertaking analysis of the information in the most comprehensive suicide terrorism database in the world, Life as a Weapon seeks to question and in turn undermine the common perception that the psychopathology of suicide bombers and their religious beliefs are the principal causes.

Instead, the book presents a cocktail of motivations that drive suicide bombers, and explains how their actions achieve multiple purposes – community approval, political success, liberation of the homeland, personal redemption or honour, refusal to accept subjugation, revenge, anxiety, defiance. Since the configuration of these driving factors is also specifically related to the circumstances of political conflict in each different country, it is only through gaining understanding and knowledge of these conditions that appropriate policies and responses can be developed that will protect the public and counter the scourge of suicide bombings.

Life as a Weapon is a pivotal text in the discussion surrounding suicide bombings, and as such it is of relevance to undergraduate students, postgraduates, and researchers working in areas such as Security Studies, Middle Eastern Studies, Terrorism, Criminology and Political Science.

Riaz Hassan is Emeritus Professor at Flinders University, Adelaide, Australia. His research interests include suicide terrorism, housing, and Muslim Societies. His recent books include Faithlines: Muslim Conceptions of Islam and Society (Oxford University Press, 2004) and Inside Muslim Minds (Melbourne University Press, 2008). He is a Fellow of the Academy of the Social Sciences in Australia, and a member of the Order of Australia.

‘To help us better understand suicide bombings Professor Riaz Hassan, one of the world’s leading sociologists, has brought together a wealth of knowledge on suicide, religion and the state, terrorism, politics and social conditions.

This masterful analysis takes us through two thousand years of history, and in recent decades across a wide geographical spread – from Sri Lanka to Chechnya, from Israel to Iraq, from Turkey to Pakistan and many places in between.

Hassan argues that suicide terrorism uses life as a weapon for altruistic purposes and is a global phenomenon which has seen more suicide bombings in Iraq alone since 2003, than in the whole world in the preceding 25 years. He shows this with the meticulous scholarship that has characterized his impressive scholarly work for decades.’ - Adam Graycar, Professor, Rutgers University, USA

‘This is a marvelous book by an extraordinary and courageous scholar. Throughout Life as a Weapon Professor Hassan challenges a number of taboos and if his data lead him that way he is ready to take politically incorrect positions. After the 9/11 tragedy (and the horror of suicide attacks wherever they occur) it is next to impossible for scholars in the West to take on objective view about who suicide bombers are, what their real motivation is, and how suicide bombing compares ethically with other acts of war. The Western media and often even Western scholars describe suicide bombers as fanatics, cowardly criminals who often commit the crimes drugged by their commanders.

Professor Hassan shows that all this received wisdom is false. Suicide bombing is hardly a fanatic, irrational act; it is actually a very effective political, military response, mostly carried out against occupying forces who have an overall military superiority and can only be challenged or even defeated by suicide terrorism.

There will be readers who will be upset when confronted by this book, but as far as I am concerned this speaks for Professor Hassan. He does not excuse suicide bombing but he understands it and provokes his readers to rethink their basic – and I am sure he is right: mostly false – assumptions.’ - Ivan Szelenyi, William Graham Sumner Professor of Sociology and Professor of Political Science, Yale University, USA