Lineability
The Search for Linearity in Mathematics 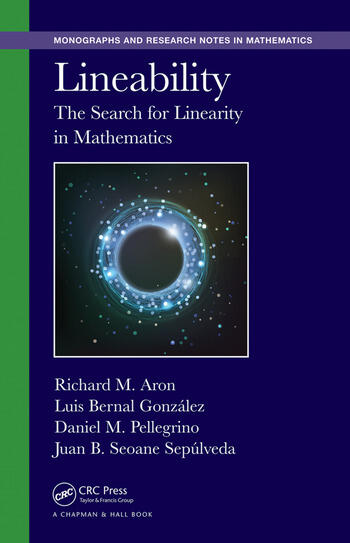 Lineability: The Search for Linearity in Mathematics

Renewed interest in vector spaces and linear algebras has spurred the search for large algebraic structures composed of mathematical objects with special properties. Bringing together research that was otherwise scattered throughout the literature, Lineability: The Search for Linearity in Mathematics collects the main results on the conditions for the existence of large algebraic substructures. It investigates lineability issues in a variety of areas, including real and complex analysis.

After presenting basic concepts about the existence of linear structures, the book discusses lineability properties of families of functions defined on a subset of the real line as well as the lineability of special families of holomorphic (or analytic) functions defined on some domain of the complex plane. It next focuses on spaces of sequences and spaces of integrable functions before covering the phenomenon of universality from an algebraic point of view. The authors then describe the linear structure of the set of zeros of a polynomial defined on a real or complex Banach space and explore specialized topics, such as the lineability of various families of vectors. The book concludes with an account of general techniques for discovering lineability in its diverse degrees.

What one needs to know
Weierstrass' monsters
Differentiable nowhere monotone functions
Nowhere analytic functions and annulling functions
Surjections, Darboux functions, and related properties
Other properties related to the lack of continuity
Continuous functions that attain their maximum at only one point
Peano maps and space-filling curves

Zeros of Polynomials in Banach Spaces


What one needs to know
Zeros of polynomials: the results

What one needs to know
The negative side
When lineability implies dense-lineability
General results about spaceability
An algebrability criterion
Additivity and cardinal invariants: a brief account

Exercises, Notes, and Remarks appear at the end of each chapter.

Richard M. Aron is a professor of mathematics at Kent State University. He is editor-in-chief of the Journal of Mathematical Analysis and Applications. He is also on the editorial boards of Revista de la Real Academia de Ciencias Exactas, Fisicas y Naturales. Serie A. Matematicas (RACSAM) and the Mathematical Proceedings of the Royal Irish Academy. His primary research interests include functional and nonlinear analysis. He received his PhD from the University of Rochester.

Luis Bernal González is a full professor at the University of Seville. His main research interests are complex analysis, operator theory, and the interdisciplinary subject of lineability. He is the author or coauthor of more than 80 papers in these areas, many of them concerning the structure of the sets of mathematical objects. He is also a reviewer for several journals. He received his PhD in mathematics from the University of Seville.

Daniel M. Pellegrino is an associate professor at the Federal University of Paraíba. He is also a researcher at the National Council for Scientific and Technological Development (CNPq) in Brazil. He is an elected affiliate member of the Brazilian Academy of Sciences and a young fellow of The World Academy of Sciences (TWAS). He received his PhD in mathematical analysis from Unicamp (State University of São Paulo).

Juan B. Seoane Sepúlveda is a professor at the Complutense University of Madrid. He is the coauthor of over 100 papers. His main research interests include real and complex analysis, operator theory, number theory, geometry of Banach spaces, and lineability. He received his first PhD from the University of Cádiz jointly with the University of Karlsruhe and his second PhD from Kent State University.

"This book is a compendium of the currently known results on the size of linear and algebraic substructures within different classes of real or complex valued functions, which, as a whole, do not have such structures. The classes of such functions always contain some examples that serve as counterexamples in different mathematical settings. The work presented in this text facilitates better understanding of such examples. In general, this is a very well-written book that will be great reading for anybody interested in a true understanding of the riches of the structures of real and complex valued functions."
—Krzysztof Chris Ciesielski, Professor of Mathematics, West Virginia University, and Adjunct Professor of Radiology, University of Pennsylvania, USA

"Hippasus of Metapontum shocked mathematicians of Pythagoras’s school claiming the irrationality of the root of 2. Cantor astonished the mathematical community with the proof of the uncountability of irrational numbers. Weierstrass’s monster of a continuous everywhere but differentiable nowhere frightened mathematicians with this counterintuitive example. Every single mathematician remembers the first time in her life when she discovers one of these three results.
Gurariy proved in the sixties that the set of Weierstrass’s monsters in the interval contains a vector space of countably infinite dimension. This result resonated in the last years and motivated the study of the existence of large algebraic structures of shocking mathematical objects, attracting the interest of many mathematicians from analysis, algebra, and topology.
This excellent book provides the first systematic treatment of the quest for linearity in nonlinear topics. I encourage other mathematicians to take part in this adventure. They will be astonished after reading it!"
—J. Alberto Conejero, IUMPA, Universitat Politècnica de València, Spain

"The late 2000s and early 2010s witnessed an explosion of papers on lineability/spaceability, which is the search for linearity on nonlinear problems. This trend in modern analysis investigates the existence—or not—of a (infinite dimensional, closed, dense) subspace of a given topological vector space formed, up to the null vector, by elements enjoying a certain prescribed distinguished property. Problems of completely different natures are studied, and here comes the relevance of this book: this is the first time all these different problems and solutions are assembled in book form. The book is very well written and everyone interested in the field should have it as permanent companion."
—Geraldo Botelho, Universidade Federal de Uberlândia, Brazil

"Ever since the discovery of continuous and nowhere differentiable functions by Weierstrass, the study of exotic objects in analysis has fascinated mathematicians. While it has been known for some time that the sets of such exceptional objects are often topologically large, researchers have recently even uncovered large algebraic structures within these sets. This excellent book provides the first comprehensive treatment of the search for linearity in fundamentally nonlinear situations. It covers a wide variety of strange analytical objects and discusses their lineability properties. The few general techniques that are available are also presented. Each chapter contains a useful list of exercises and a notes-and-remarks section that directs the reader to the extensive literature in the field. The book is ideally suited for a one-semester course on lineability and related notions, and it is essential reading for anybody interested in the fascinating story of strange objects in analysis."
—Karl Grosse-Erdmann, Department of Mathematics, Université de Mons, Belgium

"Mathematical ‘monsters’ (functions satisfying certain pathologies) are, despite the conventional wisdom, more common and ubiquitous than they may appear at first glance. This wonderful book helps you find large vector spaces or linear algebras of such specimens. The book is a delicious piece of art that introduces the elegant linearity inside of nonlinear problems."
—Domingo García, University of Valencia, Spain