Listening to Hanna Segal
Her Contribution to Psychoanalysis 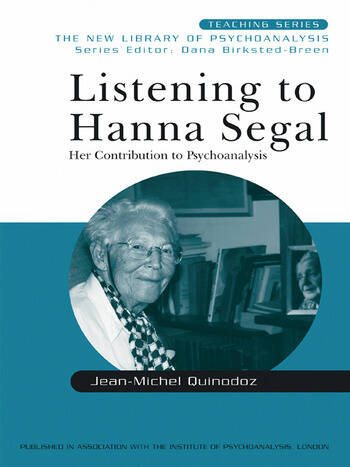 Listening to Hanna Segal: Her Contribution to Psychoanalysis

Winner of the 2010 Sigourney Award!

Jean-Michel Quinodoz provides the reader with a comprehensive overview of Segal's life, her clinical and theoretical work, and her contribution to psychoanalysis over the past sixty years by combining actual biographical and conceptual interviews with Hanna Segal herself or with colleagues who have listened to Segal in various contexts.

Listening to Hanna Segal explores both Segal's personal and professional histories, and the interaction between the two. The book opens with an autobiographical account of Segal's life, from her birth in Poland to her analysis with Melanie Klein in London where she became the youngest member of the British Psychoanalytical Society. Quinodoz goes on to explain Segal's contributions in various fields of psychoanalysis including:

Throughout the interviews Segal speaks of her close relationships with prominent colleagues such as Klein, Rosenfeld, and Bion, making this book both a valuable contribution to the history of psychoanalysis and an indication of the evolution of psychoanalytic ideas over the past six decades. This clear summary of Hanna Segal's life and her contribution to psychoanalysis will be an essential guide to anyone studying Segal and her contemporaries.

Introduction, Hanna Segal: The Teacher and Her Teaching. Acknowledgements. Hanna Segal: A Psychoanalytic Autobiography. Psychoanalysis and the Aesthetic Experience. The Psychoanalytic Treatment of Psychotic Patients. From Symbolic Equation to Symbolic Representation. The Fundamental Conflict Between the Life and Death Drives. Presenting the Kleinian Approach to Psychoanalysis. Interpreting the Function of Dreams Along with their Content. The Analysis of Elderly Patients. Seminars and Supervisions. Nuclear Terror, Psychotic Anxieties and Group Phenomena.

"...Quinodoz is superb, probing, discursive and illuminating. What I was left with at the end of the book was a very clear sense of Segal as a person, an analyst and a thinker, and a sense that one had indeed encountered her in a multitude of ways." - Maggie McAlister, Journal of Analytical Psychology, Vol. 53, 2008

"...written in a very original style in that it offers an explanatory text of each concept and theory presented and combines this with a conversation with Hanna Segal... this original compilation offers a textual type of seminar... it is unique and would interest all those who appreciate the evolution of psychoanalytic thought. It is a living historical account of one of the most influential psychoanalysts of our time; and, because it touches on so many aspects of both individual and social issues, it will be appreciated by psychoanalysts of all persuasions as well as by artists, therapists, philosophers and others. A valuable addition to our psychoanalytic library." - Ricardo Stramer, International Journal of Psychoanalysis