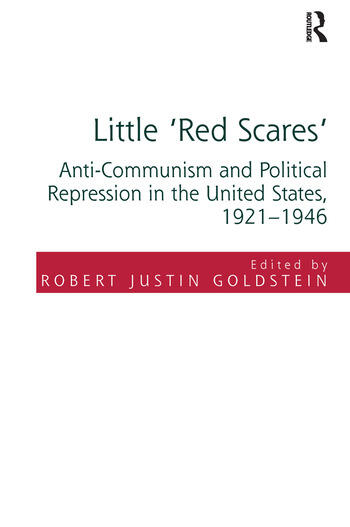 Anti-communism has long been a potent force in American politics, capable of gripping both government and popular attention. Nowhere is this more evident that the two great 'red scares' of 1919-20 and 1946-54; the latter generally - if somewhat inaccurately - termed McCarthyism. The interlude between these two major scares has tended to garner less attention, but as this volume makes clear, the lingering effects of 1919-20 and the gathering storm-clouds of 'McCarthyism' were clearly visible throughout the 20s and 30s, even if in a more low-key way. Indeed, the period between the two great red scares was marked by frequent instances of political repression, often justified on anti-communist grounds, at local, state and federal levels. Yet these events have been curiously neglected in the history of American political repression and anti-communism, perhaps because much of the material deals with events scattered in time and space which never reached the intensity of the two great scares. By focusing on this twenty-five year 'interim' period, the essays in this collection bridge the gap between the two high-profile 'red scares' thus offering a much more contextualised and fluid narrative for American anti-communism. In so doing the rationale and motivations for the 'red scares' can be seen as part of an evolving political landscape, rather than as isolated bouts of hysteria exploding onto - and then vanishing from - the political scene. Instead, a much more nuanced appreciation of the conflicting interests and fears of government, politicians, organised labour, free-speech advocates, employers, and the press is offered, which will be of interest to anyone wishing to better understand the political history of modern America.

'[Little 'Red Scares' is] a welcome addition ... Generations of historians, and volumes such as [this] have done much to expose the invidious ends and disingenuous tactics of American anti-communists.'

'...the entire collection is excellent...'

'...Thirteen splendidly written essays... A major contribution of these essays is the way that, both individually and collectively, they reveal the deep layers and wide variety of forms that political repression and anticommunism took in these years, recapturing the vast network of groups and individuals who engaged in such repression, from the Federal Bureau of Investigation, J. Edgar Hoover, and Martin Dies to different state national guards and local police red squads to business groups, the American Legion, the Ku Klux Klan, and even the American Federation of Labor.’

'Edited by one of the nation’s finest chroniclers of radicalism in the US, the essays in this collection explore a sometimes-overlooked period when repression was meted out to left-wing organizations and activists. Included in the collection are offerings by other top historians ... This welcome volume clearly adds to the knowledge of interwar radicalism and repression in the US. Summing Up: Highly recommended. All levels.'

'The well-researched chapters of Little "Red Scares" cover an array of subjects....This collection’s greatest asset is its scope; by examining civil rights education, consumption, labor, citizenship, and politics in the vertices of the interwar era, a fuller picture of anticommunism in America emerges.

As Goldstein states, many of the events and developments discussed in this volume lent subsequent generations of Americans a vocabulary to employ when debating the merits of capitalism and the perceived threats of communism. ... each chapter is informative, tightly organized, and engagingly written. Little "Red Scares" will be of interest to a wide range of scholars.'

Stephen Nepa, Journal for the Study of Radicalism

'Little "Red Scares" is an important contribution to the literature on American anticommunism. It gathers together thirteen experts in the field, and sheds light on a period in the history of American anticommunism that has received relatively little historiographical attention: the years between 1921 and 1946. The volume is edited by a pioneer in the field, Robert Justin Goldstein. As Goldstein makes clear in his succinct introduction, this volume proves that the first Red Scare of 1919–1920 was not a blip in American history: rather, it was the opening salvo for decades of anticommunist, counter-subversive activity. Within this framework, McCarthyism was nothing new under the sun. Further, Little "Red Scares" explores the many faces of counter-subversion between 1921 and 1946. Anticommunism was implemented at the federal, state, and municipal levels, often to varying degrees and at different times. The book shows that the boom in activism was a grassroots matter, too. Militant religious and secular organizations were rabidly anticommunist and remarkably well-organized, and often bundled their attacks on communism within broader battles against the rise of secularism, the influx of immigrants, or racial and gender equality. Given its breadth and depth, Little "Red Scares" will be of interests to specialists in a range of different fields. With appropriate scaffolding, it may be put to productive use in undergraduate and graduate courses on US history, the history of anticommunism, and the history of countersubversion since World War I.'

'The average student in a survey course covering United States history will typically learn about anti-communism at two different times: first, after World War I, with the First Red Scare of 1919–1920; and second, after World War II, with a lecture on the Second Red Scare of the McCarthy era of the 1950s. But scholars of anti-radicalism in U.S. history know that this attempt to contain the discussion of anti-communism to two distinct eras is misleading. The great contribution of Robert Justin Goldstein's new edited volume "Little ‘Red Scares’" is to remind us that anti-communist hysteria was not limited to these two periods of panic, but instead shaped the political culture of all the years between them.

Goldstein has solicited contributions from many of the most accomplished historians of American anti-communism, and it is useful to collect their work on these years into one volume.'