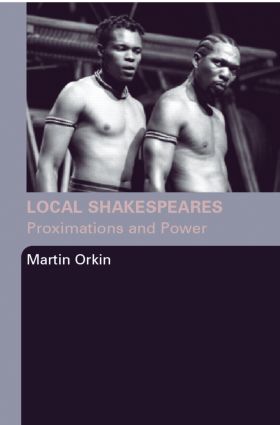 This remarkable volume challenges scholars and students to look beyond a dominant European and North American 'metropolitan bank' of Shakespeare knowledge. As well as revealing the potential for a new understanding of Shakespeare's plays, Martin Orkin adopts a fresh approach to issues of power, where 'proximations' emerge from a process of dialogue and challenge traditional notions of authority.

Divided into two parts this book:

'This is a lively, combative book which merits a place among the relatively few new books on Shakespeare which are worth pulling off the library shelf more than once… This is a significant critical intervention and a valuable contribution to Shakespeare studies, not least because Orkin's readings of the late plays incorporate the insights of many other fine critics, but because his own scholarship and sensitivity illuminate each of the plays with which he engages.' - Michael Jardine, Literature and History

Acknowledgements. Introduction: Travelling to Shakespeare's Late Plays Part 1: Local Knowledge and Shakespeare's Global Texts 2. Intersecting Knowledges: Shakespeare in Timbuktu 3. Active Readers: Whose Muti in the Web of it? 4. William Tshikinya -Chaka I Presume? Cultural Encounter in Performance Part 2: Encountering Men in Shakespeare's Late Plays Prologue: The 'Infirmities of Men' in Pericles. Cymbeline: 'That Most Venerable Man Which/I did Call my Father'. The Winter's Tale: 'Let No Man Mock Me'. The Tempest: 'Any Strange Beast there Makes a Man'. Afterword: The Unruliness of Patriarchy. Select Bibliography

Martin Orkin, who teaches in the Departments of English and Theatre at the University of Haifa, is author of Shakespeare Against Apartheid and Drama and the South African State. He is also co-editor, with Ania Loomba, of Postcolonial Shakespeares, and editor of At the Junction: Four Plays by the Junction Avenue Theatre Company.