Loudspeakers
For Music Recording and Reproduction 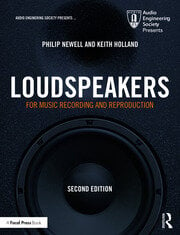 Loudspeakers: For Music Recording and Reproduction

Loudspeakers: For Music Recording and Reproduction, Second Edition is a comprehensive guide, offering the tools and understanding needed to cut out the guesswork from loudspeaker choice and set-up.

Philip Newell and Keith Holland, with the assistance of Sergio Castro and Julius Newell, combine their years of experience in the design, application, and use of loudspeakers to cover a range of topics from drivers, cabinets, and crossovers, to amplifiers, cables, and surround sound. Whether using loudspeakers in a recording studio, mastering facility, broadcasting studio, film post-production facility, home, or musician’s studio, or if you simply aspire to improve your music-production system this book will help you make the right decisions.

Introduction
1. What Is a Loudspeaker?
2. Diversity of Design
3. Loudspeaker Cabinets
4. Horns
5. Crossovers
6. Amplifiers and Loudspeaker Cables - A General Review
7. Loudspeaker Behaviour in Rooms
8. Form Follows Function
9. Subjective and Objective Assessment
10. The Mix, the Music and the Monitors - The Instability of Perception
11. Low Frequency and Transient-Response Dilemmas
12. The Challenges of Surround Sound

14. What to Measure: And Why - The Influence of Advanced Measurement and Psychoacoustic Concepts on Loudspeaker Design
Glossary of Terms
Index

Philip Newell is a Fellow of the Institute of Acoustics (IOA), a member of both the Audio Engineering Society (AES) and the Society of Motion Picture and Television Engineers (SMPTE), and a member of the Seaplane Pilots Association. He has written ten books on acoustics and electroacoustics, and has published around 200 related articles, journal papers, and conference papers. Since 1992 he has lived in Spain, and during the course of his work has travelled to over 30 countries. His recording career has been very musically varied, from the Duke Ellington Orchestra to Queen, from The Who to The Warsaw Philharmonic Orchestra, from Mike Oldfield to John Cale, and from English brass bands to Welsh choirs.

is currently an Associate Professor (Senior Lecturer) at the Institute of Sound and Vibration Research (ISVR), University of Southampton, UK, where he has worked full time as a student, researcher, and lecturer since 1984, and from where he obtained a BSc in Engineering Acoustics and Vibration in 1987, and a PhD on loudspeaker horns in 1993. Since 1990, Keith has taught electroacoustics and various other subjects, mainly audio-related, to under- and post-graduate students at the ISVR, and for ten of those years, also to the Tonmeister students at the University of Surrey.

The artwork for Loudspeakers has been co-ordinated by Sergio Castro, a highly experienced musician, record producer, and recording engineer, with over 25 years of experience in the manufacturing of professional monitoring loudspeakers. The authors were also assisted by Julius Newell, an expert in electroacoustics and sound-system engineering, and who is also an established designer and manufacturer of professional monitoring loudspeakers.

"If electro-acoustics happens to be a subject you wish you understood more, or if before a speaker purchase you'd like to be better informed, there is, as far as I'm aware, absolutely no better place to start." - Phil Ward, Sound on Sound

"This new edition finds the book continuing in its place [...] as one of the essential reference books on loudspeakers." - Mark Gander, Journal of the Audio Engineering Society