Love and Society
Special Social Forms and the Master Emotion 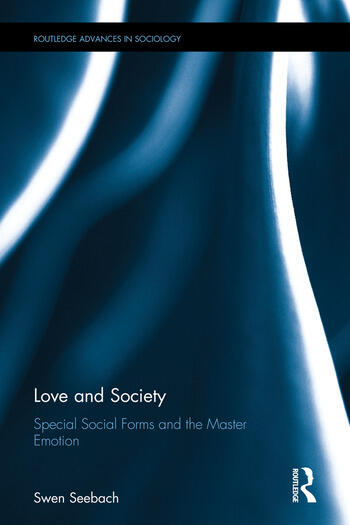 Love and Society: Special Social Forms and the Master Emotion

Why does love matter?

discusses the meaning and importance of love for contemporary society. Love is not only an emotion that occurs in our intimate relationships; it is a special emotion that allows us to relate to each other in a lasting fashion, to create out of our individual pasts a shared past, which enables us to project a shared future.

Bringing together the idea of Simmel’s second order forms with theories of love, this insightful volume shows that the answer to why love is so central to society can be found in the social transformation of the last two centuries. It also explains how we can build our strongest social bonds on the fragility of an emotions thanks to the creation of "special moments" (love rituals) and "intimate stories" (love myths) that are central to the weaving of lasting social bonds. Going to the cinema, reading a book together or sharing songs are forms of weaving bonds of love and part of the cycle of love. But love is not only shared between two people; the desire and the search for love is something we share with almost all members of society.

With rich empirical data, an analysis of love’s transformation in modernity, and a critical engagement with classical and contemporary theorists, this book provides a lively discussion on the meaning and importance of love for today’s society. It will be of interest to undergraduate and postgraduate students and postdoctoral researchers who are interested in fields such as Sociology of Emotions, Sociological Theory and Sociology of Morality.

1. On Love - Between a Social Bond and an Emotion *

1.2. The Whys and Why-nots of critical theory and feminist analysis in order to define and work with love *

1.5. Niklas Luhmann on Love and Intimacy *

1.6. Would Luhmann Consider Love as an Emotion? *

2.5. From Love as an Emotion to Love as a Second Order Form *

2.6. The Conditions for Love as a Second Order Form. On the Changing Nature of Society and its Forms and Apriorities *

could love become the predominant form of the second order? *

3.2. From the crisis before to the crisis after First Modernity – Why could love become a second order form? *

The First Apriority – Building Wholes Out of Fragments *

The Second Apriority – Limits of the Social *

3.3. The Changes of the Three Apriorities during the Next Modernity Crisis. *

The Second Apriority – The Return of the Oppressed – Body, Emotions, Desire *