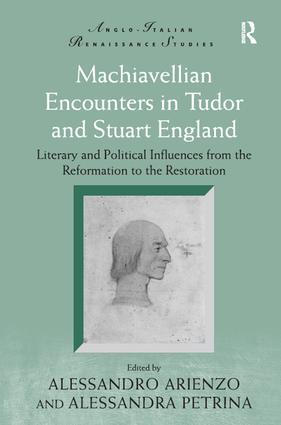 Literary and Political Influences from the Reformation to the Restoration, 1st Edition

Taking into consideration the political and literary issues hanging upon the circulation of Machiavelli's works in England, this volume highlights how topics and ideas stemming from Machiavelli's books - including but not limited to the Prince - strongly influenced the contemporary political debate. The first section discusses early reactions to Machiavelli's works, focusing on authors such as Reginald Pole and William Thomas, depicting their complex interaction with Machiavelli. In section two, different features of Machiavelli's reading in Tudor literary and political culture are discussed, moving well beyond the traditional image of the tyrant or of the evil Machiavel. Machiavelli's historiography and republicanism and their influences on Tudor culture are discussed with reference to topical authors such as Walter Raleigh, Alberico Gentili, Philip Sidney; his role in contemporary dramatic writing, especially as concerns Christopher Marlowe and William Shakespeare, is taken into consideration. The last section explores Machiavelli's influence on English political culture in the seventeenth century, focusing on reason of state and political prudence, and discussing writers such as Henry Parker, Marchamont Nedham, James Harrington, Thomas Hobbes and Anthony Ascham. Overall, contributors put Machiavelli's image in sixteenth- and seventeenth-century England into perspective, analyzing his role within courtly and prudential politics, and the importance of his ideological proposal in the tradition of republicanism and parliamentarianism.

'… this is a well-produced and lucidly written collection, which deserves to be read by scholars interested in early modern political thought, the English face of MachiÂ­avelli, and Anglo-Italian literary, intellectual, and cultural relations.' SHARP News 'From this collective effort the diverse, complex and controversial figure of Machiavelli emerges. This volume demonstrates the impacts of his theories throughout the centuries and the continuous, evolving mutations of the debate which have surrounded his work.' Journal of the Northern Renaissance

Alessandra Petrina is associate professor of English Literature at the UniversitÃ  degli Studi di Padova, Italy. She has written on late-medieval and Renaissance comparative literature and intellectual history. Alessandro Arienzo is senior lecturer in Political Philosophy at the University of Naples ’Federico II’, Italy. He has published on early modern reason of state and on contemporary political governance.

This series places early modern English drama within the context of the European Renaissance and, more specifically, within the context of Italian cultural, dramatic, and literary traditions, with reference to the impact and influence of both classical and contemporary culture. Among the various forms of influence, the series considers early modern Italian novellas, theatre, and discourses as direct or indirect sources, analogues and paralogues for the construction of Shakespeare's drama, particularly in the comedies, romances, and other Italianate plays. Critical analysis focusing on other cultural transactions, such as travel and courtesy books, the arts, fencing, dancing, and fashion, will also be encompassed within the scope of the series. Special attention is paid to the manner in which early modern English dramatists adapted Italian materials to suit their theatrical agendas, creating new forms, and stretching the Renaissance practice of contaminatio to achieve, even if unconsciously, a process of rewriting, remaking, and refashioning of 'alien' cultures. The series welcomes both single-author studies and collections of essays and invites proposals that take into account the transition of cultures between the two countries as a bilateral process, paying attention also to the penetration of early modern English culture into the Italian world.