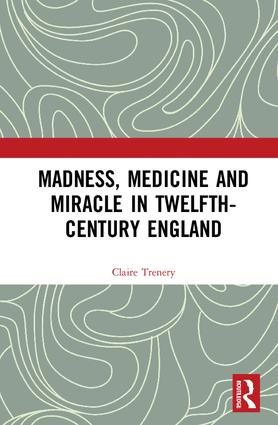 This book explores how madness was defined and diagnosed as a condition of the mind in the Middle Ages and what effects it was thought to have on the bodies, minds and souls of sufferers.

Madness is examined through narratives of miraculous punishment and healing that were recorded at the shrines of saints. This study focuses on the twelfth century, which has been identified as a ‘Medieval Renaissance’: a time of cultural and intellectual change that saw, among other things, the circulation of new medical treatises that brought with them a wealth of new ideas about illness and health. With the expanding authority of the Roman Church and the tightening of papal control over canonisation procedures in this period, historians have claimed that there was a ‘rationalisation’ of the miraculous. In miracle records, illnesses were explained using newly-accessible humoral theories rather than attributed to divine and demonic forces, as they had been previously.

The first book-length study of madness in medieval religion and medicine to be published since 1992, this book challenges these claims and reveals something of the limitations of the so-called ‘medicalisation’ of the miraculous. Throughout the twelfth century, demons continue to lurk in miracle records relating to one condition in particular: madness. Five case studies of miracle collections compiled between 1070 and 1220 reveal that hagiographical representations of madness were heavily influenced by the individual circumstances of their recording and yet were shaped as much by hagiographical patterns that had been developing throughout the twelfth century as they were by new medical and theological standards.

"The author deserves high credit for her excellent analysis of those accounts about mad people and their miraculous healing through the various saints. She carries out close readings of the miracle tales and produces convincing results." - Albrecht Classen, Sehepunkte

"Trenery is also excellent on the language of madness across this period, and its nuances and complexities." - Simon Jarrett (Birkbeck College, University of London)

Claire Trenery completed her PhD at Royal Holloway, University of London in 2017. She specialises in the history of madness and medicine, focusing on the twelfth century and the cultural and intellectual climate that accompanied the development of Scholastic learning in Western Europe. She has published articles on medieval madness, with particular attention to the impact of madness on the bodies, minds and souls of sufferers.