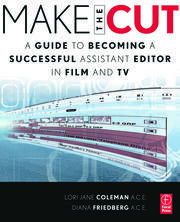 Make the Cut: A Guide to Becoming a Successful Assistant Editor in Film and TV

Being a successful editor is about more than just knowing how to operate a certain piece of software, or when to make a certain transition. On the contrary, there are many unwritten laws and a sense of propriety that are never discussed or taught in film schools or in other books.

Based on their own experiences, first as upcoming assistant editors, then as successful Hollywood editors, the authors guide you through the ins and outs of establishing yourself as a respected film and video editor.

Insight is included on an array of technical issues such as script breakdown, prepping for sound effects, organizing camera and sound reports, comparison timings, assemply footages and more. In addition, they also provide first-hand insight into industry protocol, providing tips on interviewing, etiquette, career planning and more, information you simply won't find in any other book.

The book concludes with a chapter featuring Q+A sessions with various established Hollywood editors about what they expect from their assistant editors.

The Plan; From Dailies to Online; How the Assistant's Job Varies in Different Venues from Features to Reality TV; Protocol; Planning Ahead; Q+A from Hollywood Editors; Appendix

LORI JANE COLEMAN, A.C.E. Lori Jane Coleman, A.C.E. began her career assisting Danford Greene, A.C.E. and Lou Lombardo, A.C.E. on films such as Fun with Dick and Jane, Which Way Is Up? and Up in Smoke. She has won two Eddie Awards from A.C.E. for The Deliberate Stranger (directed by Marvin Chomsky) and Chicago Hope - the Pilot (directed by Michael Pressman and written by David E. Kelley) and has one Emmy nomination. She has worked as an editor on a range of feature films and shows including Dawson's Creek, The Practice, and The Shield. Lori Jane got her 'break' while assisting Bud Isaacs, A.C.E., on Thou Shalt Not Commit Adultery (directed by Delbert Mann (Academy award for Marty 1955)) and moved up to editor at the age of 24. She worked as Assistant Editor at American International Pictures (A.I.P) in 1973 and joined the Film Editors Guild in 1974 with the help of Salvatore Billiterri (Head of Post Production) and James Honore (Assistanthead of Post). After four films, Ebony, Ivory and Jade, Sheba Baby (Pam Grier), Cooley High (Michael Schultz' directorial debut), and Return to Macon County Line, Lori took an apprentice job at Columbia Studios for Danford B. Greene, A.C.E., on Fun With Dick and Jane (George Segal, Jane Fonda), followed by assisting Greene on Outlaw Blues (Susan St. James and Peter Fonda), and Which Way Is Up? (Richard Pryor, directed by Michael Schultz).

DIANA FRIEDBERG, A.C.E. Diana Friedberg A.C.E. was born in South Africa and began her film career after graduating with a degree in drama from the University of Cape Town in 1967. On-the-job training as a film editor soon led her to England where she interned at Pinewood Studios on feature film productions. After returning to South Africa at the end of 1969 she edited over 21 feature films, hundreds of hours of episodic television, animation series, documentary series and commercials. She has the distinction of being the first women to direct a feature film in South Africa. A Master of Fine Arts degree in Cinema from the University of Southern California (USC) followed in 1976. She returned to South Africa to teach a course in filmmaking which she initiated at the University of the Witwatersrand in Johannesburg and continued producing television documentary series and dramatic series with her husband, Lionel Friedberg. In 1986 she relocated to Los Angeles with her family where she successfully pursued a career as a film editor and a producer. Feature films, educational films for companies such as Disney and National Geographic and many groundbreaking shows for cable followed. She was invited to become a member of the distinguished American Cinema Editors (A.C.E.) and has continued to be active on the Intern Program, training young students in the art and craft of editing. Her latest contribution to the film world has been a five-part documentary series entitled World on a String. As a labor of love, Diana picked up a camera and traveled to some of the remotest parts of the planet in over 30 countries to realize her dream of telling the amazing anthropological story of role of beads in society over the period of 100,000 years. The series has already garnered worldwide recognition and won 29 awards adding to her list of awards for other films in various genres.

"A thorough guide to becoming an indispensable assistant editor.

"Make the Cut explains the postproduction editing workflow with utmost clarity and illustrates with abundant examples. Priceless! The book reflects a great depth of knowledge, that clearly has come from years of experience and accumulated wisdom. This book inspires excellence and will provide any aspiring editor with a huge leg up."

"This is terrific preparation for anyone who wants to be an assistant editor.  I teach editing at USC and I will certainly have this on my class' reading list.  I will also give it to anyone I hire as an assistant."

"Where was Make the Cut when I started out. [T]his is a must-read.. My biggest frustration is that there wasn't a book like this when I started editing. If there was I wouldn't have made the same political missteps or fumbles, so if you're trying to get into the editing world this book should find a home on your bookshelf."

"Make The Cut is an excellent read and a vital manual to keep in your bag when embarking on your first few assisting jobs. (..) Throughout the book it is made abundantly clear that attention to detail, tenacity and personality are all key to becoming a successful assistant editor. Make the Cut is an absolute must read for anyone seeking to begin, or develop their career in film editing."