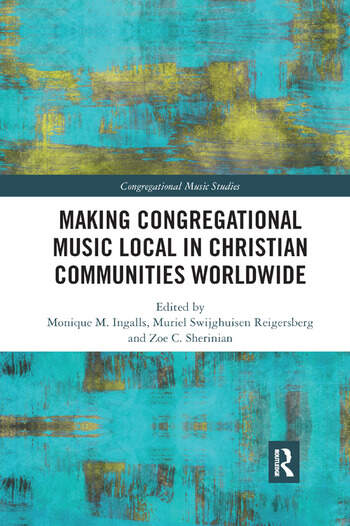 What does it mean for music to be considered local in contemporary Christian communities, and who shapes this meaning? Through what musical processes have religious beliefs and practices once ‘foreign’ become ‘indigenous’? How does using indigenous musical practices aid in the growth of local Christian religious practices and beliefs? How are musical constructions of the local intertwined with regional, national or transnational religious influences and cosmopolitanisms?

explores the ways that congregational music-making is integral to how communities around the world understand what it means to be ‘local’ and ‘Christian’. Showing how locality is produced, negotiated, and performed through music-making, this book draws on case studies from every continent that integrate insights from anthropology, ethnomusicology, cultural geography, mission studies, and practical theology. Four sections explore a central aspect of the production of locality through congregational music-making, addressing the role of historical trends, cultural and political power, diverging values, and translocal influences in defining what it means to be ‘local’ and ‘Christian’. This book contends that examining musical processes of localization can lead scholars to new understandings of the meaning and power of Christian belief and practice.

is a research development manager (strategy) and visiting fellow at the Conservatorium of Music, University of Sydney, Australia. She holds a doctorate in applied ethnomusicology. Her research has focussed on Australian Aboriginal Lutheran choral singing, applied research, the anthropology of Christianity, ethics and the relationship between music, health and well-being. She has published several book chapters and articles in her field focussing on Australian Aboriginal choral singing and constructs of identity through performance.

is Associate Professor of Ethnomusicology at the University of Oklahoma. She is author of the book Tamil Folk Music As Dalit Liberation Theology (Indiana University Press, 2014) and producer of the documentary film This Is A Music: Reclaiming An Untouchable Drum, which won the University of Oklahoma’s Outstanding Research Impact Award. Her journal publications include articles in Ethnomusicology, Worlds of Music, Women and Music, and Religion Compass. She has received numerous grants to make her next documentary film on women parai drummers and their syncretic ritual practices at the Sakthi Folk Cultural Centre.