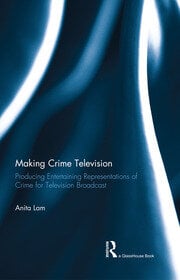 This book employs actor-network theory in order to examine how representations of crime are produced for contemporary prime-time television dramas. As a unique examination of the production of contemporary crime television dramas, particularly their writing process, Making Crime Television: Producing Entertaining Representations of Crime for Television Broadcast examines not only the semiotic relations between ideas about crime, but the material conditions under which those meanings are formulated.

Using ethnographic and interview data, Anita Lam considers how textual representations of crime are assembled by various people (including writers, directors, technical consultants, and network executives), technologies (screenwriting software and whiteboards), and texts (newspaper articles and rival crime dramas). The emerging analysis does not project but instead concretely examines what and how television writers and producers know about crime, law and policing. An adequate understanding of the representation of crime, it is maintained, cannot be limited to a content analysis that treats the representation as a final product. Rather, a television representation of crime must be seen as the result of a particular assemblage of logics, people, creative ideas, commercial interests, legal requirements, and broadcasting networks. A fascinating investigation into the relationship between television production, crime, and the law, this book is an accessible and well-researched resource for students and scholars of Law, Media, and Criminology.

List of Figures  Introduction  Chapter 1. Setting the stage: A Literature Review and Analysis  Chapter 2. On Method: Trail-sniffing Ants and Bread Crumbs of Reflexivity  Chapter 3. Breaking The Bridge: Documenting the Heterogeneous Knowledge Inputs into the Laboratory of the Writers’ Room  Chapter 4. The Case of the Missing ‘Bad Apples’: Transforming ‘Injured Cop’ into ‘The Unguarded Moment’  Chapter 5. Showcasing Hamilton: How Place Becomes Relevant in the Making of Canadian Crime Dramas  Chapter 6. Conclusion  Bibliography

Anita Lam is an Assistant Professor of Criminology in the Department of Social Science at York University, Canada.

"In Making Crime Television: Producing Entertaining Representations of Crime for Television Broadcast, Anita Lam provides a road map for potential avenues of access to the closed and ‘‘highly stratified’’ world of the entertainment industry for the uninitiated academic Hollywood neophyte. What is most insightful about Lam’s research is her depth of understanding of legal regulations and distribution concerns of network and cable television productions. She effectively argues on behalf of the need for research to be conducted on the production process, specifically on how television creators know about crime in opposition to the dominant paradigm that views entertaining representations of crime as final products and focuses on audience interpretation. By placing her analysis of crime TV shows in the cultural context of the entertainment industry, Lam found entertaining representations of crime and the criminal justice system to be ever evolving due to creative team and network executive input on script revisions." - Carolyn J. Zeppa, Entertaining Media Representations of Crime and the Criminal Justice System: A Review Essay, Critical Crimonology, 2015, vol23.pp209-213

‘This book offers a fascinating and important contribution to the literature on media representation of crime and punishment. The systematic focus on the production process is novel. It is also enlightening, revealing the micro-processes through which media production is entangled with power and dominant ideologies.’ - Dr Jamie Bennett, Governor HMP Grendon and Springhill, Prison Service Journal