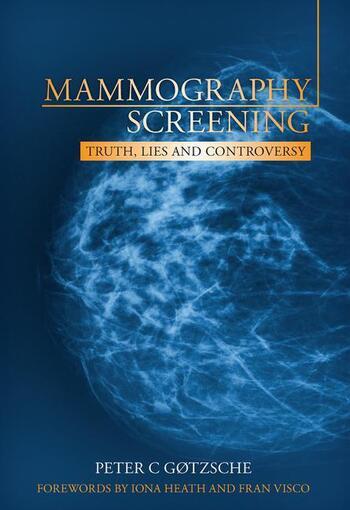 'This book gives plenty of examples of ad hominem attacks, intimidation, slander, threats of litigation, deception, dishonesty, lies and other violations of good scientific practice. For some years I kept a folder labeled Dishonesty in breast cancer screening on top of my filing cabinet, storing articles and letters to the editor that contained statements I knew were dishonest. Eventually I gave up on the idea of writing a paper about this collection, as the number of examples quickly exceeded what could be contained in a single article.' From the Introduction The most effective way to decrease women's risk of becoming a breast cancer patient is to avoid attending screening. Mammography screening is one of the greatest controversies in healthcare, and the extent to which some scientists have sacrificed sound scientific principles in order to arrive at politically acceptable results in their research is extraordinary. In contrast, neutral observers increasingly find that the benefit has been much oversold and that the harms are much greater than previously believed. This groundbreaking book takes an evidence-based, critical look at the scientific disputes and the information provided to women by governments and cancer charities. It also explains why mammography screening is unlikely to be effective today. All health professionals and members of the public will find these revelations disturbingly illuminating. It will radically transform the way healthcare policy makers view mammography screening in the future. 'If Peter Gotzsche did not exist, there would be a need to invent him ...It may still take time for the limitations and harms of screening to be properly acknowledged and for women to be enabled to make adequately informed decisions. When this happens, it will be almost entirely due to the intellectual rigour and determination of Peter Gotzsche.' From the Foreword by Iona Heath, President, RCGP 'If you care about breast cancer, and we all should, you must read this book. Breast cancer is complex and we cannot afford to rely on the popular media, or on information from marketing campaigns from those who are invested in screening. We need to question and to understand. The story that Peter tells matters very much.' From the Foreword by Fran Visco, President, National Breast Cancer Coalition

Foreword by Iona Heath. Foreword by Fran Visco. Acknowledgements. Introduction. What it really means to be 'controversial'. Our collaboration with the media. Important issues in cancer screening. What it means 'to have cancer'. Overdiagnosis and overtreatment. Erroneous diagnoses and carcinoma in situ. Basic issues in cancer epidemiology. Randomised trials, observational studies and a little statistics. Why screening leads to misleading survival statistics. Why 10--year survival is also misleading. Does screening work in Sweden? Stonewalling the Cochrane report on screening. The Danish National Board of Health interferes with our report. Troubling results in the Lancet. The Canadian trials. Media storm. Email from researchers. Our collaboration with the trialists. Ten letters to the editor. Creative manipulations in Sweden. Peter Dean, a remarkable character. Bad manners also in Norway. Continued troubles in Denmark. Harms dismissed by the Cochrane Breast Cancer Group. The process with the Cochrane review. Of mites and men. Confusion over who is in charge. The Lancet publishes the harms of screening. Vitriolic mass email from Peter Dean. Beating about the bush in the United Kingdom. Condemnations in Sweden. Contempt of science in Denmark and Norway. Delayed media storm in the United States after our 2001 reviews. Miettinen and Henschke's cherry--picking in the Lancet. Additional reactions in the United States. The Danish National Board of Health circles the wagons. US and Swedish 2002 meta--analyses. US Preventive Services Task Force's meta--analysis. Nyström's updated Swedish meta--analysis. Scientific debates in the United States. Peter Dean is wrong again. Multiple errors in the International Journal of Epidemiology. Publication of entire Cochrane review obstructed for 5 years. Cochrane editors stonewall our Cochrane review. Lessons for the future. Welcome results in France. Editorial misconduct in the European Journal of Cancer. Editorial misconduct. Threats, intimidation and falsehoods. Debates in the Scientist and the Cancer Letter. Tabár's 'beyond reason' studies. Criticism of our work in the Journal of Surgical Oncology. Other observational studies of breast cancer mortality. The United States and the United Kingdom. Denmark, Lynge's 2005 study. Denmark, our 2010 study. Overdiagnosis and overtreatment. Cancers that regress spontaneously. The 1986 UK Forrest report. Overdiagnosis in the randomised trials. Systematic review of overdiagnosis in observational studies. Observational studies from Denmark and New South Wales. The doubt industry. Duffy's studies on overdiagnosis. Lynge's studies on overdiagnosis. Carcinoma in situ and the increase in mastectomies. Ad hominem attacks: a measure of desperation? UK statistician publishes in Danish. Inappropriate name--dropping. Further ad hominem arguments. Lynge's unholy mixture of politics and science. Ad hominem attacks ad infinitum. US recommendations for women aged 40 - 49 years. What have women been told? Website information on screening. Invitations to screening. A scandalous revision of the Danish screening leaflet. Our screening leaflet. Breast screening: the facts, or maybe not. American Cancer Society. Information from other cancer societies. Getting funding or not getting funding. What do women believe?. Extraordinary exaggerations. What is the ratio between benefits and harms? Duffy's 'funny' numbers. Exaggerating 25--fold. The exaggerations finally backfire. The ultimate exaggeration. Tabár threatens the BMJ with litigation. Falsehoods and perceived censorship in Sweden. Celebrating 20 years of breast screening in the United Kingdom. Can screening work? Plausible effect based on tumour sizes in the trials. Lead time. Plausible effect based on tumour stages in the trials. No decrease in advanced cancers. Where is screening at today? Problems with reading mammograms. False promises. Important information is being ignored. Beliefs warp evidence at conferences. Does breast screening make women live longer? Where next? Is screening a religion? A press release from Radiology that wasn't. Has all my struggle achieved anything? Why has so much evidence about screening been distorted? Time to stop breast cancer screening. Appendix 1: Tabár's explanations in the Cancer Letter and our replies. Appendix 2: Our 2008 mam-mography screening leaflet. Appendix 3: The press release Radiology withdrew at the last minute. Index.