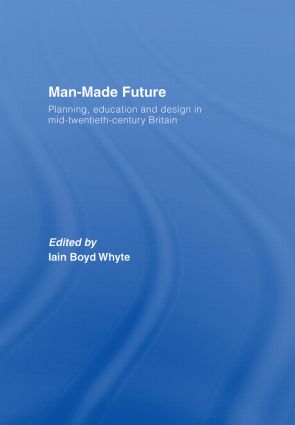 This anthology of essays by a group of distinguished scholars investigates post-1945 city planning in Britain; not from a technical viewpoint, but as a polemical, visual and educational phenomenon, shifting the focus of scholarly interest towards the often-neglected emotional and aesthetic aspects of post-war planning.

Each essay is grounded in original archival research and sheds new light on this critical era in the development of modern town planning. This collection is a valuable resource for architectural, social and urban historians, as well as students and researchers offering new insights into the development of the mid-twentieth century city.

'The essays … are fascinating if only because the period of certainty and decisive action that they describe is so different from town planning today.' – The Architectural Review

Iain Boyd Whyte is Professor of Architectural History at the University of Edinburgh. He has been a Research Fellow of the Alexander von Humboldt-Stiftung, a Getty Scholar and, more recently, a Senior Program Officer at the Getty Foundation, Los Angeles. He is a fellow of the Royal Society of Edinburgh and has served as a Trustee of the National Galleries of Scotland.