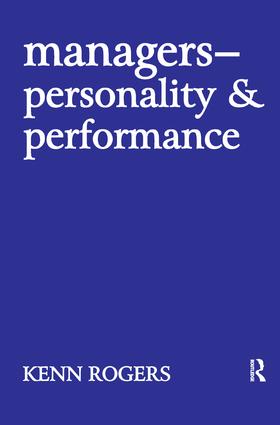 What makes people go into business? What makes some businessmen--and some businesses--outstandingly successful, while others, with opportunities just as good, fail? These questions are often asked, and have often been studied from the point of view of economics or of organizational theory. This book is one of the first scientific studies to probe these questions in depth, in terms both of the individual business manager's character, personality, and drives, and of the group psychology of his milieu.

Starting with a descriptive survey of an important and homogeneous European industry, it traces a clear pattern of success and failure among the firms operating in it. Then, using as a basis the transcript of more than 600 interviews with executives of the firms concerned, it seeks the reasons for each firm's position.

Rogers does not seek to minimize the importance of objective external factors. But his study of top management suggests reasons why an environment that spells success for some firms spells disaster in others. This is a fascinating and important book, which will be read with profit both by businessmen and by social scientists.