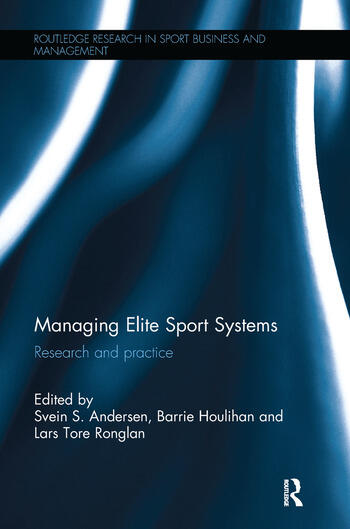 Over the last twenty years or so there has been a sharp increase in interest from national sports federations and governments in the development of effective elite sport systems, particularly focused on achieving success in the summer and winter Olympic Games. Many countries now have publicly funded elite sports strategies which provide specialist facilities and support staff and often provide direct financial support for athletes. These developments have stimulated academic interest in describing the elite sport systems, analysing the processes by which policy is established and evaluating the impact of these policies on elite athlete success. Far less attention has been placed on the operation of the elite sports systems and on how the system interfaces with the athlete. The aim of this book is to refocus attention on the management and operation of systems designed to deliver elite success.

The book draws on the theoretical literature in implementation, organisation theory, leadership and complexity. This provides an initial context for analysis and a stimulus for theory development around key questions such as:

The first part of the book focuses on aspects of the effectiveness of elite sports systems and the second explores aspects of systems operation focused on the interface between the athlete and the sport development system, and cross-cutting themes within the book include the management of talent identification and coach development. This is illuminating reading for any student, researcher or practitioner working in sport development, sport management or sports coaching.

1. Introduction Part 1: Making Systems Work: Mechanisms of management 2. The Athlete Entourage and the Culture of Performance Measurement: Caring Sister and Big Brother 3. Modernisation and Elite Sport Development: Talent identification and coach development 4. Nordic Elite Sport: The ecology of talent development 5. Why has Malaysia not Won a Medal at the Olympics? 6. France and Change of the State-Centred System Part 2: Delivering Athlete Support 7. Organising and Managing Core Processes in Elite Athlete Management: The case of Norwegian cross country skiing 8. Creating an Elite Sport Environment: A holistic view 9. Selecting Leaders: ‘Getting the right people in the right places’ 10. Talent Identification and Development in Germany: State of play and current tasks 11. Integrating Micro and Meso: How sport systems can deal with career transitions of athletes

Svein S. Andersen is a professor of organization studies at BI Norwegian Business School, and adjunct professor at the Centre for Training and Performance, Norwegian School of Sport Sciences. He has been director for Centre for EU Research, University of Oslo, and chair of the Department of Leadership and Organizational Behaviour at Norwegian Business School. He has a PhD from Stanford University and has been a visiting professor at UC Berkeley, UC Santa Barbara and Centre des Hautes Etudes, Paris. Andersen has been involved as a consultant in various projects with the Norwegian elite sport organization Olympiatoppen, has authored or edited 12 books and numerous articles, and his recent research interests include the management of elite sport, both at the macro and micro level.

is associate professor at the Norwegian School of Sport Sciences and currently Head of Department of coaching and psychology at the same institution. He has been Head of Research at the Centre of Training and Performance in Oslo and was recently elected as vice rector at Norwegian School of Sport Sciences. He completed his PhD in 2000 and has been involved in teaching and research in sport for 15 years. His research interests include sport sociology, sport coaching and the organization of learning and development processes in various sport contexts. Ronglan has been assistant coach for the Norwegian national handball team, and has been involved as a consultant in various projects with the Handball Association and also the Norwegian elite sport organization Olympiatoppen. He has authored and edited numerous books and articles, including The Sociology of Sports Coaching, Routledge, 2011 (with R. Jones, P. Potrac and C. Cushion).

is Professor of Sport Policy in the School of Sport, Exercise and Health Sciences at Loughborough University, UK and also Visiting Professor at the Norwegian School of Sport Sciences, Oslo. He has been involved in teaching and researching sport for over twenty years. His research interests include the domestic and international policy processes for sport. He has a particular interest in sports development, the diplomatic use of sport, and drug abuse by athletes. He has authored or edited nineteen books and authored over fifty journal articles. His recent books include: the Routledge Handbook of Sports Development, Routledge, 2011 (edited with M. Green) and Sport Policy in Britain, Routledge, 2012 (with I. Lindsey). In addition to his work as a teacher and researcher, Barrie Houlihan has undertaken consultancy projects for various UK government departments, UK Sport, Sport England, the Council of Europe, UNESCO, the World Anti-Doping Agency and the European Union. He is the editor in chief of the International Journal of Sport Policy and Politics.