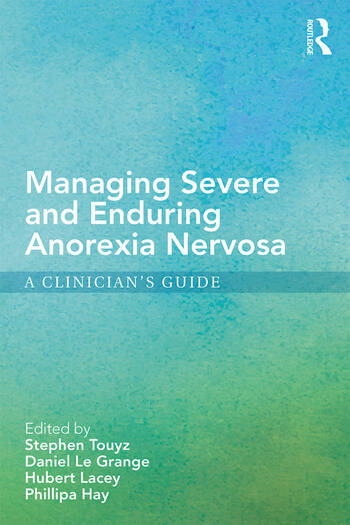 Based on the only evidence-based randomized controlled trial yet undertaken in patients with severe and enduing anorexia nervosa, Managing Severe and Enduring Anorexia Nervosa uses the results of that trial to present a new paradigm for treatment. Moreover, this informative new text assembles the leading scientists across three continents to provide a comprehensive overview and new paradigm for treatment and stimulate interest in the development of new psychosocial approaches. Students, clinicians, and researchers in the field of eating disorders will find this edited volume a valuable reference handbook in the clinical management of patients with anorexia nervosa.

J. Hubert Lacey, MD, MPhil, FRCPsych is Emeritus Professor of Psychiatry at St George’s, University of London where he was Chairman of Department. He is Medical Director of the Eating Disorders (ED) Units at Newbridge House, Birmingham and the Nightingale Hospital in central London. He developed the St. George’s ED Service into the largest in the United Kingdom (UK) for which he received NHS awards. He has designed and established seven other ED services, in-patient, day- and out-patient services. He is Senior Board Trustee on the UK charity for ED. He has held senior positions in the University of London, the Royal College of Psychiatrists and the National Health Service. He is Chairman of the European Council on ED and member of other international ED organisations. He is on the Boards of ED journals. Prof Lacey has published extensively on ED over 45 years including the first published treatment for bulimia and first description of multi-impulsive EDs. He has published on diagnosis, pathogenesis and different treatment approaches. He has received many award for teaching He has a special interest in patients with SE-AN.

“Stephen Touyz and his co-authors are to be complimented on this, “overdue and timely“  textbook shedding light on the neglected area of severe and enduring anorexia nervosa – and stimulating interest in new treatment approaches for this particular patient group.”—Professor Stephan Zipfel, Centre of Excellence for Eating Disorders, University of Tuebingen, Germany

“This multi-author book made me want to weep with joy. Written by leading authorities in the field it focuses on the plight of a neglected group of patients, and as such it addresses a major gap. Packed with research knowledge, clinical wisdom, and describing the lived experience and journey to recovery of one long-term anorexia sufferer, it provides enlightenment and gives hope to sufferers, families, and clinicians alike. This will be a classic.”—Ulrike Schmidt, MD PhD FRCPsych FAED, Professor of Eating Disorders, King’s College London, UK

“Touyz, LeGrange, Lacey, and Hay treat what is possibly the most important concern in the eating disorders field in a volume that is sensitive, well-balanced, comprehensive, and (it is no understatement) paradigm shifting. Their book blends attunement to latest evidence with that kind of clinical savvy that is the mark of the most seasoned of clinician-scientists.”—Howard Steiger, PhD, Head, Eating Disorders Continuum, Douglas University Institute, Professor, Psychiatry Department, McGill University