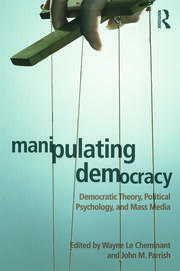 Manipulation is a source of pervasive anxiety in contemporary American politics. Observers charge that manipulative practices in political advertising, media coverage, and public discourse have helped to produce an increasingly polarized political arena, an uninformed and apathetic electorate, election campaigns that exploit public fears and prejudices, a media that titillates rather than educates, and a policy process that too often focuses on the symbolic rather than substantive.

Manipulating Democracy offers the first comprehensive dialogue between empirical political scientists and normative theorists on the definition and contemporary practice of democratic manipulation. This impressive array of distinguished scholars—political scientists, philosophers, cognitive psychologists, and communications scholars—collectively draw out the connections between competing definitions of manipulation, the psychology of manipulation, and the political institutions and practices through which manipulation is seen to produce a tightly-knit exploration of an issue at the heart of democratic politics.

Wayne Le Cheminant is Assistant Professor of Political Science at Loyola Marymount University. He is co-editor of the volume Mormons and Politics: The Lessons of History, Belief, and Practice.

John M. Parrish is Assistant Professor of Political Science at Loyola Marymount University. He is the author of Paradoxes of Political Ethics: From Dirty Hands to the Invisible Hand.

"This book introduces a free-wheeling debate on political manipulation, addressing important questions on all sides. Some readers will find their preconceived notions of the danger of citizen manipulation challenged, while others will find in these pages little relief from fears that citizens are disempowered by elites who have the tools and knowledge to manipulate. All readers will come away with a new appreciation for the complexity of the issue in both normative theory and empirical practice."
—David Redlawsk, Rutgers, The State University of New Jersey

"In this time of great partisan conflict in politics, threats from abroad, and fear amplified by the mass media, I cannot think of a more timely and important volume. It is high time that the manipulation of public opinion—and American democracy—is given this kind of broad and thoughtful treatment it deserves."
—Robert Y. Shapiro, Columbia University

"In Manipulating Democracy, Professors Le Cheminant and Parrish convene an impressive array of scholars expert in theories of democracy, political psychology, and media to explore the ways by which the voices of a few disproportionately influence democratic governance. The authors here document how a privileged minority plays upon collective emotions in ways that cause the polity to gladly choose charlatans who press nations towards the regrettable and quick instead of the deliberate and considered."
—John Brehm, University of Chicago

"It is not a simple thing to conceptualize manipulation in the context of democracy, where rhetorical and emotional persuasion, the generation of ‘facticity,’ and conflicting narratives constitute the center of political practice. Manipulating Democracy takes on this challenge with great success and without arbitrarily reducing the complexity of the question. The essays in this volume set the terrain for a wide range of exciting future work in an area of research that has until now been poorly conceptualized, and should be read broadly by scholars interested in the fundamental questions of democratic theory and practice."
—Ed Wingenbach, University of Redlands