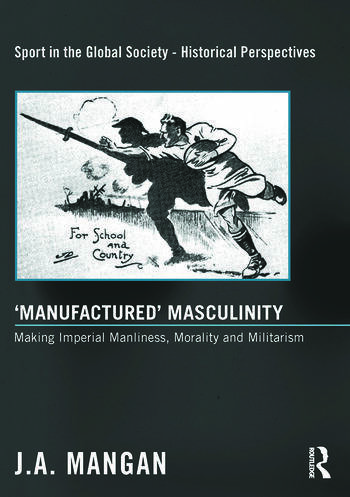 'Manufactured' Masculinity should be considered essential reading for scholars in the humanities and social sciences at every level and in all parts of the academic world. It weaves together brilliantly the elements of the 'manufacture' of masculinity in the period world-famous 'public' school system for the privileged which serviced the largest empire, the world has ever known, at the zenith of its control and which has had a significant influence in the formation of the modern world. This authoritative study of the making of British imperial masculinity shines light on the period of Muscular Christianity, Social Darwinism and Militarism as meshed ideological instruments of both power and persuasion.

This magisterial study reveals the extraordinary and paramount influence of games fields as the 'machine tools' in an 'industrial process' with the schools as 'workshops' containing 'cultural conveyor-belts' for the production of robust, committed and confident servants of empire, and templates for imperial reproduction in imperial possessions. Mainly on efficient 'production belt' playing fields of the privileged minds were moulded, attitudes were constructed and bodies shaped - for imperial manhood. Earlier 'manliness' was metamorphosized, morality was redefined and militarism at the high point of imperial grandeur was an adjunct. Professor Mangan outlines this unique process of cultural conditioning with a unique range of evidence and analysis.

This book was published as a special double issue of the International Journal of the History of Sport.

James Anthony Mangan: An Appreciation Sheldon Rothblatt  Preface: ‘Swansong’ J.A. Mangan  Revolution  1. Prologue: Middle-Class ‘Revolutionaries’ in Pursuit of Moral, Physical, Political and Social Health and the History ofModern European Sport as a History of Modern European Ideas  Metamorphosis  2. Bullies, Beatings, Battles and Bruises: ‘Great Days and Jolly Days’ at One Mid-Victorian Public School  3. Athleticism: A Case Study of the Evolution of an Educational Ideology  4. Social Darwinism and Upper-Class Education in Late Victorian and Edwardian England  5. From Hooligans to Heroes and from Ferocity to Fair Play: Some English Historical Origins of Modern World Sport  6. Philathlete Extraordinary: A Portrait of the Victorian Moralist Edward Bowen  Adjunct  7. Duty unto Death: English Masculinity and Militarism in the Age of the New Imperialism  8. ‘Muscular, Militaristic and Manly’: The Middle-Class Hero as Moral Messenger  9. Moralists, Metaphysicians And Mythologists: The ‘Signifiers’ of a Victorian Sub-Culture  10. Games Field and Battlefield: A Romantic Alliance in Verse and the Creation of Militaristic Masculinity  11. ‘Golden Boys’ of Playing Field and Battlefield: Celebrating Heroes – ‘Lost’ Middle-Class Women Versifiers of the Great War  Emulation  12. Imitating Their Betters and Disassociating from Their Inferiors: Grammar Schools and the Games Ethic in the Late Nineteenth and Early Twentieth Centuries  13. Missionaries to the Scottish Middle Classes  14. Catalyst of Change: John Guthrie Kerr and the Adaptation of an Indigenous Scottish Tradition  15. Almond of Loretto: Scottish Educational Visionary and Reformer  Dissemination  16. Images for Confident Control: Stereotypes in Imperial Discourse  17. Britain’s Chief Spiritual Export: Imperial Sport as Moral Metaphor, Political Symbol and Cultural Bond  18. ‘The Grit of Our Forefathers’: Invented Traditions, Propaganda and Imperialism  19. Ethics and Ethnocentricity in British Tropical Africa  20. Noble Specimens of Manhood: Schoolboy Literature and the Creation of a Colonial Chivalric Code  21. Soccer as Moral Training: Missionary Intentions and Imperial Legacies  22. Epilogue: Aggression and Androgyny: Gender Fusion In and Beyond Sport in the Post-Millennium

J.A. Mangan, Emeritus Professor of Strathclyde University, is a Fellow of the Royal Historical Society, author of the internationally acclaimed Athleticism in the Victorian and Edwardian Public School (CUP) and The Games Ethic and Imperialism (Penguin/Viking), a Founding Editor of the International Journal of the History of Sport, other journals including Sport in Society and the series Sport in the Global Society. He has lectured worldwide and held fellowships (or their equivalent) in America (Berkeley), Africa, Australasia and England (Oxford and Cambridge). 'Manufactured' Masculinity has attracted exceptional acclaim in America, Africa, Asia, Australasia and Europe.

(This book is) a substantial body of stylish writings that merit special attention. If ever there was a prose style so completely fitted to the subject – a muscular prose not without sympathy, a strong voice not without unexpected sentiment, a direct message but one that appreciates cultural complexity – here it is for all of us to note and enjoy.

The articles that were collected and presented in the special issue offer fresh materials and further arguments that significantly extend many of the themes that Professor Mangan has developed in the corpus of his work...the students find my assignments of Professor Mangan’s work to be among the most enjoyable and instructive of all the readings.

Published together these articles become a most appreciated source for generations of future scholars interested in how gender roles, military preparations, imperial strategies, educational practices and ideological indoctrination have been, and are indeed increasingly, intertwined in most human societies. Put differently, J. A. Mangan wrote global history decades before it became a catchword among fashionable academics.

This collection is so rich, so wide-ranging and so intellectually valuable that it deserves additional publication in book form. It would undoubtedly benefit the world of scholarship.

Although much has been written on this and associated topics this book serves exceedingly well as a compendium that embraces the whole spectrum under one cover.

As is common with J.A. Mangan’s work, the book is extremely well written and draws upon his own work as well as that of the diverse pens of others such as J.A. Hobson, J.O. Springhall, E.C. Mack, Thomas Hughes and Alec Waugh and more recently, James Walvin, John Hoberman and John Lowerson – to mention but a few.

Mangan pulls no punches and tells it as it was: ‘sans polishing’.

All in all this book provides a valuable resource for the academic, the student and anyone interested in the place of the public school and its sports field in creating that form of ‘maleness’ that was peculiar to those times. It is however, not just a sports history text. Yes, it addresses and analyses the place of sport in the public and independent schools of Imperial Britain but it will also serve the social, political, religious, educational and cultural historian just as well.

Manufactured Masculinity is the rich fruit of…years of further work and it shows Mangan developing his original insights and interpretations in many different and rewarding directions.

The volume…highlights the qualities which have always characterized Mangan’s scholarship: the wide-ranging, in-depth research, the subtle and nuanced analysis, the vigorous argument and the palpable passion for his subject which leads him to lambast such eminent scholars as John MacKenzie, David Cannadine and Norman Davies for their cultural myopia in overlooking the vital role of the games cult in the political, social, cultural and emotional history both of modern Europe and the British Empire.