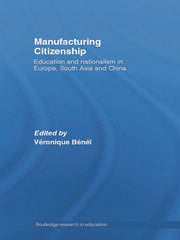 In recent years citizenship has emerged as a very important topic in the sciences, mainly as a result of the effects of migration, population displacements and cultural heterogeneity.

This book focuses on educational enterprise and how it affects national ambitions, cultural preferences and political trends. It also examines the major effects of globalisation, the large-scale movements of populations, and the impact this all has in terms of education and citizenship.

With contributions from an array of international scholars including Etienne Balibar, and featuring various international case studies, Manufacturing Citizenship will be extremely interesting to the education academic community as well as many readers within cultural studies and politics.

Veronique Benei is Research Fellow at the London School of Economics, UK.