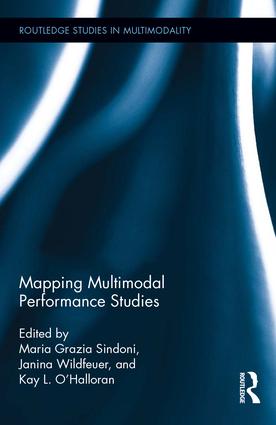 This book is a first attempt to map the broad context of performance studies from a multimodal perspective. It collects original research on traditional performing arts (theatre, dance, opera), live (durational performance) and mediated/recorded performances (films, television shows), as well as performative discursive practices on social media by adopting several theories and methodologies all dealing with the notion of multimodality. As a mostly dynamic and also interactive environment for various text types and genres, the context of performance studies provides many opportunities to produce meaning verbally and non-verbally. All chapters in this book develop frameworks for the analysis of performance-related events and activities and explore empirical case studies in a range of different ages and cultures. A further focus lies on the communicative strategies deployed by different communities of practice, taking into account processes of production, distribution, and consumption of such texts in diverse spatial and temporal contexts.

3 Making Meaning Through Movement: A Functional Grammar of Dance Movement

4 The Phantoms of the Opera: Towards a Multi-Dimensional Interpretative Framework of Analysis

5 The Eyes Have It: ‘In the Gaze … Everything Happened’

8 Who’s afraid of Conchita Wurst? Drag Performers and the Construction of Multimodal Prosody

9 From Text to Performance: Discourse Analytical Thoughts on New Forms of Performances in Social Media

Maria Grazia Sindoni is Assistant Professor in English Linguistics and Translation at the University of Messina, Italy. She has published four books and several articles on systemic-functional linguistics, multimodality, critical discourse analysis, corpus linguistics, theories of semiosis of communication and computer-mediated interaction.

is a Researcher at Bremen University, Germany, in the areas of multimodal film and (digital) media studies as well as linguistics, discourse analysis, and semiotics. Her recent publications include a monograph on Film Discourse Interpretation from 2014 as well as several edited collections on multimodality and film analysis.

is Professor in the School of Education, Faculty of Humanities at Curtin University. Her main research area is multimodal analysis, with a focus on digital and mixed methods approaches, mathematical and scientific discourse, and visual and multimodal literacy. She has established large interdisciplinary projects to develop interactive digital technologies and visualisation techniques.

Edited by Kay O'Halloran, Routledge Studies in Multimodality aims to advance knowledge of multimodal resources such as language, visual images, gesture, action, music, sound, 3-D artefacts, architecture and space, as well as the ways these resources integrate to create meaning in multimodal objects and events.