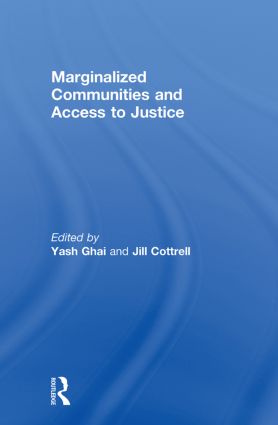 Marginalized Communities and Access to Justice is a comparative study, by leading researchers in the field of law and justice, of the imperatives and constraints of access to justice among a number of marginalized communities. A central feature of the rule of law is the equality of all before the law. As part of this equality, all persons have the right to the protection of their rights by the state, particularly the judiciary. Therefore equal access to the courts and other organs of the state concerned with the enforcement of the law is central. These studies – undertaken by internationally renowned scholars and practitioners – examine the role of courts and similar bodies in administering the laws that pertain to the entitlements of marginalized communities, and address individuals' and organisations' access to institutions of justice: primarily, but not exclusively, courts. They raise broad questions about the commitment of the state to law and human rights as the principal framework for policy and executive authority, as well as the impetus to law reform through litigation. Offering insights into the difficulties of enforcing, and indeed of the will to enforce, the law, this book thus engages fundamental questions about value of engagement with the formal legal system for marginalized communities.

Preface 1. The Rule of Law and Access to Justice, Yash Ghai and Jill Cottrell 2. Access to Justice: Lessons from South Africa’s Land Reform Program, Geoff Budlender 3. Access to Land and Justice: Anatomy of a State without the Rule of Law, Yash Ghai 4. The Movement of Landless Rural Workers in Brazil and their Struggles for Access to Law and Justice, Boaventura de Sousa Santos and Flavia Carlet 5. Access to Justice and Indigenous Communities in Latin America, J. Faundez 6. Seeking justice for the historical claims of indigenous people in Aotearoa New Zealand, David V. Williams 7. Peasants’ struggle for land in China, Eva Pils 8. ‘Honor’ and Violence Against Women in Pakistan, Hannah Irfan 9. Peace Versus Justice in Northern Kenya: Dialectics of State and Community Laws, Tanja Chopra 10. The Opportunities and Challenges of Using Public Interest Litigation to Secure Access to Justice for Roma in Central and Eastern Europe, James A. Goldston and Mirna Adjami 11. Conclusions and Reflections, Yash Ghai and Jill Cottrell

Yash Ghai recently retired after teaching law in universities in four continents, most recently as the Sir Y K Pao Professor of Public Law and the University of Hong Kong. He was the UN Secretary General's Special representative on Human Rights in Cambodia until 2008. He has taught especially human rights and constitutional law.

Jill Cottrell was a university law teacher for 40 years, teaching especially economic social and cultural rights in recent years. She recently retired from the University of Hong Kong.

During the past two decades, a substantial transformation of law and legal institutions in developing and transition countries has taken place. Whether prompted by the policy prescriptions of the so-called Washington consensus, the wave of  democratization, the international human rights movement or the emergence of new social movements, no area of law has been left untouched. This massive transformation is attracting the attention of legal scholars, as well as scholars from other disciplines, such as politics, economics, sociology, anthropology and history. This diversity is valuable because it promotes cross-disciplinary dialogue and cooperation. It is also important because today the study of law cannot ignore the process of globalization, which is multifaceted and thus calls for inter-disciplinary skills and perspectives. Indeed, as globalization deepens, legal institutions at the national level are influenced and shaped by rules, practices and ideas drawn, imposed or borrowed from abroad.