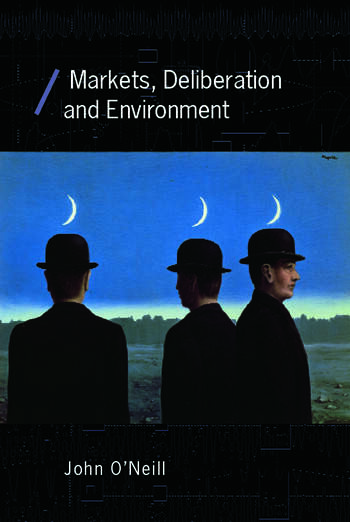 What is the source of our environmental problems? Why is there in modern societies a persistent tendency to environmental damage? From within neoclassical economic theory there is a straightforward answer to those questions: it is because environmental goods and harms are unpriced. They come free.

This position runs up against a view which runs in entirely the opposite direction, that our environmental problems have their source not in a failure to apply market norms rigorously enough, but in the very spread of these market mechanisms and norms. The source of environmental problems lies in part in the spread of markets both in real geographical terms across the globe and through the introduction of markets mechanisms and norms into spheres of life that previously have been protected from markets.

In this book, John O’Neill conducts a thorough examination of these two opposing viewpoints covering a discussion of the ethical boundaries of markets, the role of private property rights in environmental protection, the nature of sustainability and the valuation of goods over time.

This book is essential reading for undergraduate and postgraduate students studying courses in ecological and environmental economics.

'The expansion of the market has been a worry to many. But while some are concerned about the expansion of the market in geographical terms (meaning, in fact, globalization), most social democrats have discussed it in terms of the goods which are now subject to the market. Perhaps the two most mentioned goods are education and health – the claim is that they should not be distributed, supplied and priced according to "the market", or supply and demand. However, another important good which many believe should not be subject to the caprice of the market is the 'environment'. This, actually, is a vague concept, and therefore John O'Neill holds that we should discuss a variety of 'environmental goods'. In this thought provoking and profound book, he raises the question whether environmental goods and the market go hand in hand. O'Neill's claim is that they do not; nor should we reason about the environment using market norms and/or theory. If it is not the market, then what is the right framework for thinking about the environment? O'Neill believes it is deliberative politics, or 'deliberation', as he calls it.

Step by step and in a very careful analysis, O'Neill examines, and offers a critique of dozens of arguments in support of the market discourse in the context of the environment. For example, standard economic theory holds that the reason we have so many environmental problems is that we have failed to apply market reasoning to the environment. O'Neill not only rejects this, but also shows how this could be vice versa: that the reason why we have these problems is precisely the expansion of market norms and reasoning to the environment. If mainstream economic theory claims that we should apply mechanisms of 'willingness to pay' and 'cost benefit analysis' to environmental questions, O'Neill puts forward the argument that such theories fail to grasp not preferences but the reasons people hold preferences. At this point he first hints to the solution, which he offers in more details later in the book: politics is the sphere and deliberation is the mechanism through which we can find out these reasons, which are not less important than the preferences themselves, in the context of environmental policies.

O'Neill discusses both utilitarian claims against the expansion of the market to environmental goods (e.g. Chapter 2) and other, political and communitarian arguments. One of these claims he has been putting forward for many years and in many of his books and papers, namely, that we should not be so concerned with whether indeed the market can or cannot do this or that to protect the environment, because there are non-market values and norms which many of us regard as constitutive to our identities, and which might override market considerations, regardless of whether the market does or does not protect the environment. Such norms could be justice, equality, community, or indeed values that have to do with our relationships with the not yet born (chapter 3), or with the past (chapter 5), relationships that constitute the way we think about our identity.

Whether obligations to the past should guide our policies today might be a controversial claim. In times of financial and economic crisis it might prima facie seem a luxury to commit ourselves to the past instead of caring for the well being of those living now. However, O'Neill discusses this using a rather broad notion of well being, one that is not only materialistic, but includes answers to questions such as how we live, how we respect other people, and so on (Chapters 5 and 6).

O'Neill draws our attention to several environmental goods. In fact, one of the most surprising chapter is the one that deals with the idea of 'wilderness'. Those familiar with 19th and early 20th American literature and use of the term, know that it serves to dismiss the idea that the market can be applied to environmental goods. Yet, O'Neill raises a question: is this so obvious? What about earlier times, e.g. the Lockean tradition, where wilderness is used as a reason to apply property rights and appropriation? (Chapter 7)

This shows O'Neill's approach in writing this book: although he comes from a particular political and ideological place, which he makes no effort to hide, he does subject his own positions to the same scrutiny he applies when he dismisses other ideas. This approach continues in the book's last part, where O'Neill finally elaborates on the idea and relevance of deliberation. It is clear that O'Neill is a strong supporter of this idea, as is the author of this review. But unlike some supporters, O'Neill is not blind to the critics, and seems to support a more realistic, Aristotelian version of deliberation (letting in a rhetorical account of deliberation) rather than a pure Kantian one (where deliberation is about reason and is conducted by rational participants). This is very important because too many environmental activists and philosophers have developed high expectations from deliberation. Their mistake was that they all discussed deliberation theoretically: how it should work in an ideal world. According to Habermas, for example, deliberation could lead us to consensus because when people reason rationally they should be able to find the true answer to all political questions.

Unlike these theorists O'Neill is not blind to the problems of deliberation. And yet, in this book he focuses on 'external' drawbacks: after mentioning what happens in the actual exchange of ideas (chapter 10) he seems to focus on who determines the identity of the participants, who says what the agenda is, how we should represent those who lack power vis a vis contemporary human beings (e.g. the not yet born and animals), and how the debate might get distorted because of lack of equality of power between the participants. All these problems are smoothly and wisely dealt with in the book (Chapters 11 and 12), and often shown to be not so much of a problem. And yet, perhaps not enough attention is paid to the stage of exchange of ideas. Empirical research and analysis of cases of deliberations in real life indicate that the exchange of ideas does not lead to consensus, or any innovative solution, as many theorists have speculated. On the contrary, during deliberation people start caring more about social relationships with other participants and less about the goal or policy about which they should decide; therefore they will tend to adopt a solution that strengthens their community rather than one that solves the problem at stake.

Not all environmentalists would worship superb analytical philosophy like O'Neill's; however, O'Neill's philosophy is both analytical, accurate, and vigilant, and at the same time it is full of exciting examples, stories, anecdotes, and it is full of devotion. This is a rare combination, which should make this book accessible to those interested in an introduction to the philosophy and economics of the environment, as well as to any experienced and professional environmental philosopher or economist. Not only does this book summarize the debate so far; but it is a big step towards making this debate much more profound and inspiring'