Markets, Morals, and Policy-Making
A New Defence of Free-Market Economics 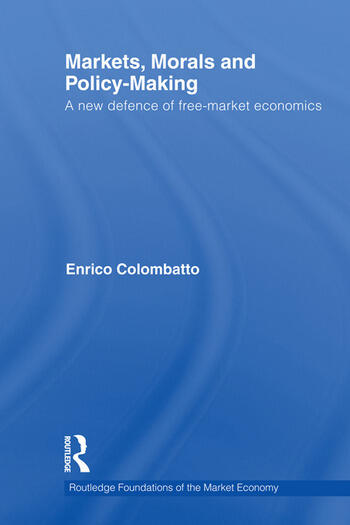 Markets, Morals, and Policy-Making: A New Defence of Free-Market Economics

Free-market economics has attempted to combine efficiency and freedom by emphasizing the need for neutral rules and meta-rules. These efforts have only been partly successful, for they have failed to address the deeper, normative arguments justifying – and limiting – coercion. This failure has thus left most advocates of free-market vulnerable to formulae which either emphasize expediency or which rely upon optimal social engineering to foster different notions of the common will and of the common good. This book offers the reader a new perspective on free-market economics, one in which the defense of markets is no longer based upon the utilitarian claim that free markets are more efficient; rather, the defense of markets rests upon the moral argument that top-down coercive policy-making is necessarily in tension with the rights-based notion of justice typical of the Western tradition.

In arguing for a consistent moral basis for the free-market view, we depart from both the Austrian and neoclassical traditions by acknowledging that rationality is not a satisfactory starting point. This rejection of rationality as the complete motivator for human economic behaviour throws constitutional economics and the law-and-economics tradition into new relief, revealing these approaches as governed by considerations derived by various notions of social efficiency, rather than by principles consistent with individual freedom, including freedom to choose.

This book shows that the solution is in fact a better understanding of the lessons taught by the Scottish Enlightenment: the role of the political context is to ensure that the individual can pursue his own ends, free from coercion. This also implies individual responsibility, respect for somebody else’s preferences and for his entrepreneurial instincts. Social virtue is not absent from this understanding of politics, but rather than being defined through the priorities of policy-makers, it emerges as the outcome of interaction among self-determining individuals. The strongest and most consistent case for free-market economics, therefore, rests on moral philosophy, not on some version of static-efficiency theorizing.

This book should be of interest to students and researchers focussing on economic theory, political economics and the philosophy of economic thought, but is also written in a non-technical style making it accessible to an audience of non-economists.

1. Introduction  2. On the Nature and Scope of Economic Reasoning  3. Time, Rationality, Cooperation  4. Institutions  5. Social Contracts and Historical Rules  6. Legitimacy and Efficiency: An Introduction to Transaction Costs and Law and Economics  7. The Normative Agendas of the Law and Economics Approach  8. Growth and Crises Reconsidered  9. Poverty and Transition  10. Final Remarks on the Economic Way of Thinking

Enrico Colombatto is Professor of Economics at the University of Turin (Italy) and Director of the International Centre for Economic Research.

‘Professor Colombatto has assumed the enormous task of cleaning out the Augean stable of modern economics, a mighty task and, amazingly, very successful. This book should be read and reread and then read again by all serious economists and their patrons, even though - or especially because - this work so clearly threatens the current establishment. Colombatto has traced the development of what he considers the morass of modern economics through a detailed examination of the long intellectual history of economics and a rigorous and critical examination of some of the assumptions inherent in the prevailing positivist-quantitative paradigm. Using illustrations as diverse as development economics, constitutional theory or Law and Economics, the author is unrelentingly critical of most modern economists. His aim is no less than to return economics to a sound philosophical and moral foundation without which it will forever flounder. He has thrown down a gauntlet to the profession which they ignore at all our perils.’ — Henry G. Manne, George Mason University School of Law, USA

'Displaying the erudition and insights of one steeped in the scholarship of both American and European perspectives, Colombatto has developed a powerful argument that economics and public policy must ultimately return to their original foundations (as exemplified, for example, by Smith and the Scottish Enlightenment) in moral philosophy. This notion will not please the majority of economists and policy analysts and the author is well aware of the fact, but it will be difficult for any of them not to take his arguments seriously if they choose to read this work with the care that it deserves.' — Hans Eicholz, Liberty Fund

‘[…] Colombatto does an excellent job of reminding us that policymaking requires value judgments and, hence, an underlying defense of the fundamental values that analysts and policymakers hold. Even though economists claim to be value free and scientific, they often smuggle in their value judgments when they move from analysis to policy recommendations, and policymaking requires judgments of what is good and bad and what is right and wrong. Colombatto provides a valuable service in reemphasizing this point and calling for an honest, open discussion of the value systems that undergird calls for government interventions.’ — The Independent Review, Spring 2013

‘Economic theory emerged out of the Scottish Enlightenment as a social science with relevance for public issues. Over the past century or so, however, economics retreated into the vapid mechanics of optimization. In this imaginative and creative book, Enrico Colombatto presents a wide-ranging restatement of the moral and social foundations of economics as a publicly-relevant discipline.’ — Richard Wagner, George Mason University, USA

'[…] the book Markets, Morals and Policy-Making is a plea for individualism, working judiciary and free markets, mainly from a historical perspective. It is also a plea for modest economics, not engaged in social planning but in explaining the case for freedom. […] The book contains a rich analysis of the history of economic thoughts against the background of historical events. The author benefits from his enormous command about the economic and philosophical literature as well as his vast knowledge of the history of theorizing and policymaking. This wealth is applied to the theory of economic policy and offers a severe and understandable warning to social scientists.' — Journal of Economics, April 2013