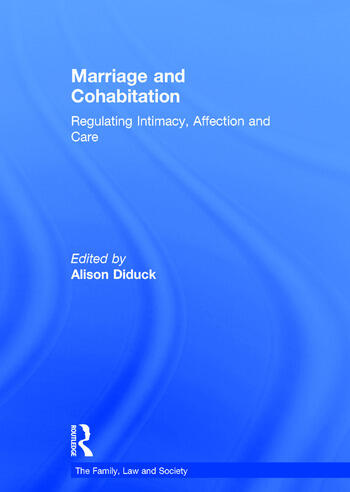 The law has long been interested in marriage and conjugal cohabitation and in the range of public and private obligations that accrue from intimate living. This collection of classic articles explores that legal interest, while at the same time locating marriage and cohabitation within a range of intimate affiliations. It offers the perspectives of a number of international scholars on questions of how, if at all, our different ways of intimacy ought to be recognised and regulated by law.

Contents: Introduction, Alison Diduck. Part I Changing Intimacies - the Theory: On the way to a post-familial family: from a community of need to elective affinities, Elisabeth Beck-Gernsheim; Intimacy transformed? A critical look at the 'pure relationship', Lynn Jamieson. Part II Changing Intimacies - Empirical Research: Why marry? - perceptions of the affianced, Mary Hibbs, Chris Barton and Joanne Beswick; Why don't they marry? Cohabitation, commitment and DIY marriage, Simon Duncan, Anne Barlow and Grace James; Cohabitation and commitment: partnership plans of young men and women, Lynn Jamieson, Michael Anderson, David McCrone, Frank Bechofer, Robert Stewart and Yaojun Li; Marriage and the moral bases of personal relationships, John Eekelaar and Mavis Maclean; The significance of marriage: contrasts between white British and ethnic minority groups in England, Mavis Maclean and John Eekelaar; Regulation of intimacy and love semantics in couples living apart together, Bernadette Bawin-Legros and Anne Gauthier; Cultures of intimacy and care beyond 'the family': personal life and social change in the early 21st century, Sasha Roseneil and Shelley Budgeon. Part III Why Legal Regulation At All?: The Marriage Act 1753: a case study in family law-making, Stephen Parker; Debates and issues regarding marriage and cohabitation in the British and American literature, Jane Lewis; Homosexual rights, Brenda Hale. Part IV Law and Marriage: The case against legal recognition of cohabitation, Ruth L. Deech; Marriage and the good of obligation, Scott Fitzgibbon; Just marriage: on the public importance of private unions, Mary Lyndon Shanley; Contract marriage - the way forward or dead end?, David McLellan; The tide in favour of equality: same-sex marriage in Canada and England and Wales, Wade K. Wright; Why marriage?, Martha Albertson Fineman; Marriage is for heterosexuals - may the rest of us be saved from it, Kenneth McK. Norrie; We will get what we ask for: why legalizi