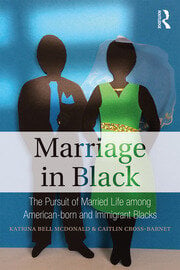 Marriage in Black: The Pursuit of Married Life among American-born and Immigrant Blacks

Despite the messages we hear from social scientists, policymakers, and the media, black Americans do in fact get married—and many of these marriages last for decades. Marriage in Black offers a progressive perspective on black marriage that rejects talk of black relationship "pathology" in order to provide an understanding of enduring black marriage that is richly lived. The authors offer an in-depth investigation of details and contexts of black married life, and seek to empower black married couples whose intimate relationships run contrary to common—but often inaccurate—stereotypes. Considering historical influences from Antebellum slavery onward, this book investigates contemporary married life among more than 60 couples born after the passage of the Civil Rights Act. Husbands and wives tell their stories, from how they met, to how they decided to marry, to what their life is like five years after the wedding and beyond. Their stories reveal the experiences of the American-born and of black immigrants from Africa or the Caribbean, with explorations of the "ideal" marriage, parenting, finances, work, conflict, the criminal justice system, religion, and race. These couples show us that black family life has richness that belies common stereotypes, with substantial variation in couples’ experiences based on social class, country of origin, gender, religiosity, and family characteristics.

Chapter 6: Is Marriage for Black People? Ethnic Perceptions of Blacks and the Institution of Marriage

Chapter 7: Sex, Money, and Beyond: Conflict in Contemporary Black Marriages

Katrina Bell McDonald earned her PhD in Sociology from the University of California at Davis. She is Associate Professor of Sociology, Co-Director of the Center for Africana Studies at the Johns Hopkins University, and an Associate of the Hopkins Population Center. She joined the faculty in 1994 and teaches and conducts research on the African-American family, race and racism, racial privilege, intersectionality, and qualitative research methods. She has been happily married for 23 years.

earned her PhD in Sociology from the Johns Hopkins University in 2010. She is a sociologist, public health researcher, and an Associate of the Hopkins Population Center. Her current research focuses on the social determinants of health. She has taught courses on research methods, public health, gender, race-ethnicity, and social inequality. She has been happily married for 26 years.

Given all the negative things written about marriage among blacks, it is refreshing—even inspiring—to read the stories of successful black married couples and to learn how they make their marriages work.
Andrew Cherlin, Benjamin H. Griswold III Professor of Public Policy and Chair of the Sociology Department, Johns Hopkins University; Author of The Marriage Go-Round: The State of Marriage and Family in America Today

is a comprehensive empirical examination of marriage among African Americans, including topics ranging from marriage patterns and attitudes to gender relations, childrearing, and conflict resolution. The authors use a multiethnic feminist perspective to analyze interviews from a class- and race- diverse group of native-born African Americans, Black immigrants, and White married couples. The voices of these couples provide a framework for engaging and critiquing an array of sociological theories on marriage and family life. Situating each topic within the context of historic and current laws and social policies that continue to malign and marginalize African-American marriages, these authors effectively challenge the social deficit perspective on black married life and rectify the scholarly neglect of the topic. By examining intraracial differences among Blacks, the book answers the call for a more nuanced portrait of family life among people of African ancestry and emphasizes the intersection between cultural and structural forces that shape their lives. This book offers a refreshing reprieve from the litany of research focusing on the marriage decline among African Americans.
Shirley A. Hill, Professor Emeritus of Sociology; Past President of Sociologists for Women in Society

Many have researched the marriage gap between white and black couples, but little attention has been paid to the black marriages that do form, and how they might be distinct from other marriages. Katrina Bell McDonald and Caitlin Cross-Barnet fill this gap and present a compelling sociological analysis of contemporary Black marriages in America. Drawing upon in-depth interviews with African-Americans born in the U.S., black immigrants from Africa and the Caribbean, and white American couples, this book demonstrates the rich diversity among black marriages in America, distinct features of these relationships, and the historical and continuing impact of race relations in America on black marriages. A must-read for any graduate student studying marriage or race!
Arielle Kuperberg, PhD., Associate Professor and Director of Undergraduate Studies in Sociology, The University of North Carolina at Greensboro

McDonald and Cross-Barnet accomplish the heroic task of contradicting current stereotypes about marriage in the American black community. They show conclusively, through vibrant vignettes from interviews with 60 couples, most of them black and all of them married for at least 5 years, that there is substantial support for the idea of being married, and that many contemporary black couples are in long-term, stable marriages in which they have varied ideas about friendship, love and passion, parenting, and egalitarian relationships. By interviewing some who came to the U.S. from Africa or the Caribbean and others born in the U.S., they show us how unproductive it has been to treat black couples as a homogenous group. A must-read for all who want to understand contemporary black marriages in America.
Philip A. Cowan, Professor of Psychology Emeritus, University of California, Berkeley;
Carolyn Pape Cowan, Adjunct Professor of Psychology, Emerita, University of California, Berkeley

Katrina Bell McDonald and Caitlin Cross-Barnet tackle the breadth of complex issues in contemporary married life—childrearing, sex, money, religion—and while this is the usual array of topics one might find in a magazine article, unlike the magazines, the authors never lost sight of the fact that this is a serious piece of research. The analysis brings new understanding of how African descendants in the U.S. navigate the history of forced separation, structural impediments and countervailing cultural norms to exhibit through their very existence that marriage is—indeed---"for black people."
Thomas A. LaVeist, PhD, Chairman and Professor, The George Washington University