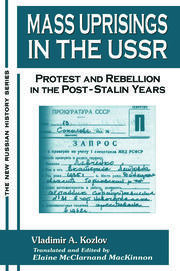 Until recent times, incidents of mass unrest in the USSR were shrouded in official secrecy. Now this pioneering work by historian Vladimir A. Kozlov has opened up these hidden chapters of Soviet history. It details an astonishing variety of widespread mass protest in the post-Stalin period, including workers' strikes, urban riots, ethnic and religious confrontations, and soldiers' insurrections. Kozlov has drawn on exhaustive research in police, procuracy, KGB, and Party archives to recreate the violent major uprisings described in this volume. He traces the historical context and the sequence of events leading up to each mass protest, explores the demographic and psychological dynamics of the situation, and examines the actions and reactions of the authorities. This painstaking analysis reveals that many rebellions were not so much anti-communist as essentially conservative in nature, directed to the defense of local norms being disturbed by particular instances of injustice or by the rash of Krushchev-era reforms. This insight makes the book valuable not only for what it tells us about postwar Soviet history, but also for what it suggests about contemporary Russian society as well as popular protests in general.

Preface; Introduction; Part One: Social Conflict in the USSR After the Death of Stalin, 1953-1960; 1. Mastering New Territories in Kazakhstan and Siberia: The Crisis of Modernization and the Heritage of the Gulag; 2. Unrest in the Military: Soldiers' Riots and Disorders; 3. Violent Ethnic Conflicts in the Virgin Lands; 4. The Return of the Deported Nations to the Northern Caucasus: The 1958 Riots in Grozny; 5. Political Disturbances in Georgia After the CPSU Twentieth Party Congress; 6. A Hooligan's War or Battles on the Margins: Uprisings of the Urban Marginaly; 7. Orthodoxy in Revolt: Uprisings Among Religious Believers; Part Two: The Crisis of "Liberal Communism": "Anti-Khrushchev" Urban Uprisings and Disorders, 1961-64; 8. The Early 1960s: Symptoms of a Social-Political Crisis; 9. Krasnodar, RSFSR, January 15-16, 1961; 10. 101 Kilometers from Moscow: Disorders in Murom and Aleksandrov, RSFSR; 11. Biisk-1961 or The Uprising on Market Day, June 25, 1961; 12. The Phenomenon of Novocherkassk: Part One; 13. The Phenomenon of Novocherkassk: Part Two; 14. Rear-Guard Battles of the Late Khrushchev Era; Part Three: "Unruly" Stagnation: Mass Uprisings from the Late 1960s to the Mid-1980s; 15. Social Unrest and Symptoms of Decay in the Brezhnev Years; Conclusion; Index