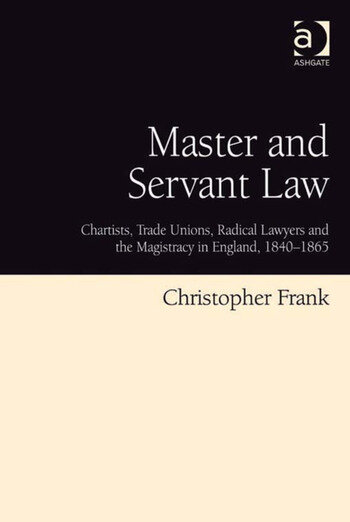 In recent years, social and legal historians have called into question the degree to which the labour that fuelled and sustained industrialization in England was actually ’free’. The corpus of statutes known as master and servant law has been a focal point of interest: throughout the eighteenth and nineteenth centuries, at the behest of employers, mine owners, and manufacturers, Parliament regularly supplemented and updated the provisions of these statutes with new legislation which contained increasingly harsh sanctions for workers who left work, performed it poorly, or committed acts of misbehaviour. The statutes were characterized by a double standard of sanctions, which treated workers’ breach of contract as a criminal offence, but offered only civil remedies for the broken promises of employers. Surprisingly little scholarship has looked into resistance to the Master and Servant laws. This book examines the tactics, rhetoric and consequences of a sustained legal and political campaign by English and Welsh trade unions, Chartists, and a few radical solicitors against the penal sanctions of employment law during the mid-nineteenth century. By bringing together historical narratives that are all too frequently examined in isolation, Christopher Frank is able to draw new conclusions about the development of the English legal system, trade unionism and popular politics of the period. The author demonstrates how the use of imprisonment for breach of a labour contract under master and servant law, and its enforcement by local magistrates, played a significant role in shaping labour markets, disciplining workers and combating industrial action in many regions of England and Wales, and further into the British Empire. By combining social and legal history the book reveals the complex relationship between parliamentary legislation, its interpretation by the high courts, and its enforcement by local officials. This work marks an important contribution to legal

Contents: Introduction: 'constitutional law versus justices' justice'; The introduction of the 1844 Master and Servant Bill: 'the statutes relating to master and servant are nearly useless'; The defeat of the 1844 Master and Servant Bill: 'triumph for labour! ... the damnable Bill crushed'; Trade union legal challenges to master and servant prosecutions: 'the value of law when honestly administered'; The Warrington cases, 1846-1847: 'he might almost as well be without trial'; Trades of Sheffield against Dr Wilson Overend, 1842-1847: 'I hope his prescriptions are better than his law'; The reform of magistrates' summary jurisdiction, 1843-1854: 'the imperious necessity of affording greater protection to justices'; The trades of Staffordshire against T. B. Rose, 1842-1851:'let them but one of them come before me and I'll commit him'

Dr Christopher Frank is Assistant Professor in History at the University of Manitoba, Canada.

'[Christopher] Frank offers perspectives on the legal system, the mechanisms of legal change, and the interactions between the law and the labour movement that many other accounts lack. The book is invaluable reading for labour historians, legal historians, and political historians of Victorian England.' Victorian Studies '[W]hat Frank does superbly is present highly complex material in a way that is not only well structured and smoothly written but also makes excellent use of the available source materials... this book is recommended reading for any academic or scholar interested in the mechanics of centre-local government relations and its struggle in getting to grips with trade union protest.' Labour History Review 'The overall significance of this legal framework in the development of labour relations in the nineteenth century is likely to remain a contested domain to which Frank’s detailed contextual analysis of cases in the mid-nineteenth century makes a valuable contribution.' Historical Studies in Industrial Relations '... an important contribution to the legal history of nineteenth-century England.' Law & History Review