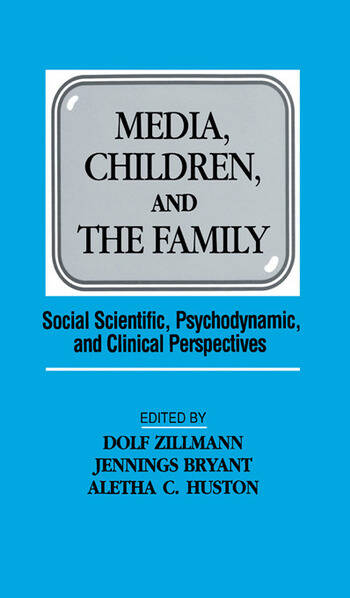 This book brings together a group of scholars to share findings and insights on the effects of media on children and family. Their contributions reflect not only widely divergent political orientations and value systems, but also three distinct domains of inquiry into human motivation and behavior -- social scientific, psychodynamic (or psychoanalytical), and clinical practice. Each of these three domains is privy to important evidence and insights that need to transcend epistemological and methodological boundaries if understanding of the subject is to improve dramatically. In keeping with this notion, the editors asked the authors to go beyond a summary of findings, and lend additional distinction to the book by applying the "binoculars" of their particular perspective and offering suggestions as to the implications of their findings.

One of the goals of the conference that resulted in this book was consensus building in the area of media and family. From examining the findings and insights of a diverse group of scholars, it seems that consensus building in several areas is a distinct possibility. Addressing the concerns of educators about the influence of the mass media of communication -- entertainment programs in particular -- on children and the welfare of the nuclear family, this volume projects directions for superior programming, especially for educational television. The influence of sex and violence on children and adults is given much attention, and the development of moral judgment and sexual expectations, among other things, is explored. The critical analysis of media effects includes examination of positive contributions of the media, such as the search for missing children and exemplary educational programs.

"Erudite essays by experts -- yet about a subject near and dear to the hearts of youth workers."
—Youthworker Update

"...one of the most extensive and comprehensive overviews of research in this area."
—Journalism Educator

"...innovative, as the editors have gathered authors with contrasting views on the subject....it is these differing viewpoints that provoke a more complex consideration of children and television than other edited volumes provide."
—Harvard Educational Review

"If ever a book demanded a classroom, this one does. A compilation of well-documented studies focuses on mass media's effects on American life and family, the text is filled with facts the public ought to ponder....it's knowledge and retrospective every educator and every individual needs."
—Public Relations Review