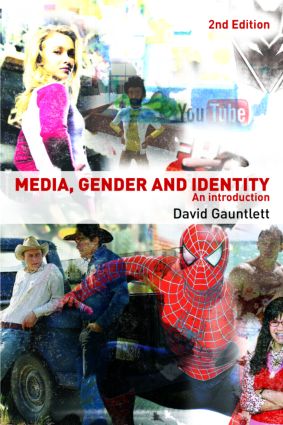 Popular media present a vast array of stories about women and men. What impact do these images and ideas have on people’s identities?

The new edition of Media, Gender and Identity is a highly readable introduction to the relationship between media and gender identities today. Fully revised and updated, including new case studies and a new chapter, it considers a wide range of research and provides new ways for thinking about the media’s influence on gender and sexuality.

David Gauntlett discusses movies such as Knocked Up and Spiderman 3, men’s and women’s magazines, TV shows, self-help books, YouTube videos, and more, to show how the media play a role in the shaping of individual self-identities.

"Gauntlett’s optimism is infectious, the subject matter engaging, and, as a result, the book is difficult to put aside. It is a thoroughly pleasurable introduction to the ties between self-identities and representations of gender in media." - Anne E. Lincoln in Journal of Consumer Culture (2003)

"Brings the theory of popular culture to the widest possible audience … Delightful and provocative." - Charlie Peverett of HERO (2002)

"The value of Gauntlett's work is his engagement with feminism and issues of masculinity in ways which…appeal to students." - Nic Groombridge, St Mary's University College

David Gauntlett is Professor of Media and Communications at the University of Westminster, London. He is the author of several books on media audiences and identities, including Moving Experiences (1995, 2005) and Creative Explorations (2007). He produces Theory.org.uk, the award-winning website on media, gender and identity.