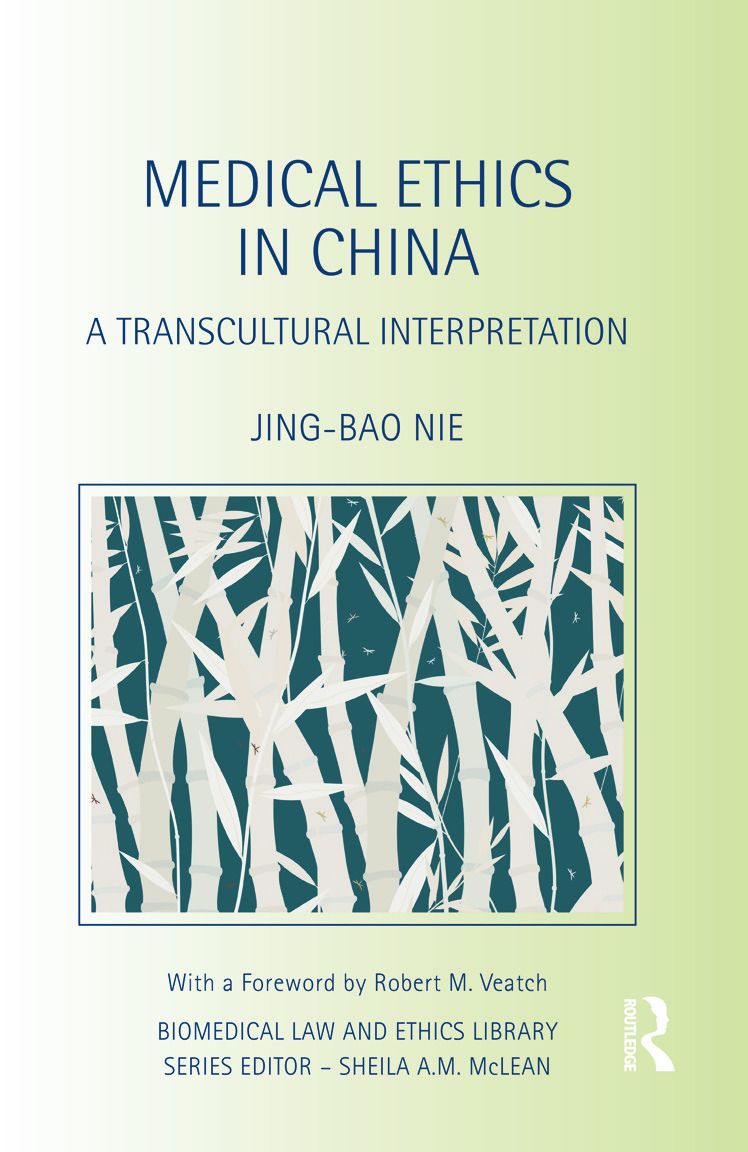 Drawing on a wide range of primary historical and sociological sources and employing sharp philosophical analysis, this book investigates medical ethics from a Chinese-Western comparative perspective. In doing so, it offers a fascinating exploration of both cultural differences and commonalities exhibited by China and the West in medicine and medical ethics.

It not only provides insights into Chinese perspectives, but also sheds light on the appropriate methods for comparative cultural and ethical studies. Through his pioneering study, Jing-Bao Nie has put forward a theory of "trans-cultural bioethics," an ethical paradigm which upholds the primacy of morality whilst resisting cultural stereotypes, and appreciating the internal plurality, richness, dynamism and openness of medical ethics in any culture.

Foreword by Robert Veatch, Introduction: The Search for a Transcultural Bioethics Part 1: Beyond Stereotypes and Stereotyping 1. Communitarian China vs. Individualistic West: a Popular Myth and its Roots 2. The Fallacy of Dichotomizing Others 3. China as the Radical other of the West, or a Misconstruction of Foucault: Sexual Excess as a Cause of Disease in China and the United States 4. Excursion: 'False Friends' in Cross-Cultural Understanding, or a Misjudgement of Needham: Refuting the Claim that the Ancient Chinese Described the Circulation of the Blood Part 2: Truths of Cultures 5. Taking China's Internal Plurality Seriously 6. The Complexity of Cultural Differences: The Forgotten Chinese Tradition of Medical Truth-Telling 7. The 'Cultural Differences' Arguement and its Misconceptions: The Return of Medical Truth-Telling in China 8. Is Informed Consent Not Applicable in China? Further Intellectual Flaws of the 'Cultural Differences' Arguement Part 3: Cultural Norms Embodying Universal Values 9. Human Rights as a Chinese Value: A Chinese Defence and Critque of the UNESCO Universal Declaration on Bioethics 10. Women's Rights in the Chinese Context : Toward a Chinese Feminist Bioethics Part 4: Chinese Wisdom for Today 11. After Cheng (Sincerity or Truthfulness): The Professional Ethics of Traditional Chinese Medicine 12. Medicine as the Heart of Humanity and the Physician as a General 13. Exploring the Core of Humanity: A Chinese-Western Dialogue on Personhood 14: Beyond Individualism and Communitarianism: A Yin-Yang Model on the Ethics of Health Promotion (With Kirk L. Smith) 15. Conclusions: Toward the Uncertain Future 16. Epilogue: Thus Spoke Hai Ruo (The God of the North Sea)

Jing-Bao Nie is an Associate Professor at the Bioethics Centre of the University of Otago in New Zealand, Furong Visiting Professor at the Centre for Moral Culture of Hunan Normal University and Adjunct Professor at the Institute for Medical Humanities of Peking University in China. His publications include; Behind the Silence: Chinese Voices on abortion (2005), (chief editor) Japan’s Wartime Medical Atrocities: Comparative Inquires in History, Science and Ethics (Routledge, 2010), three chapters in The Cambridge World History of Medical Ethics (2009), and numerous journal articles and other book chapters.