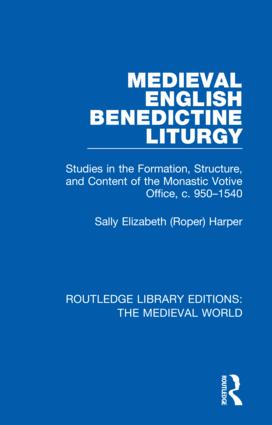 Studies in the Formation, Structure, and Content of the Monastic Votive Office, c. 950-1540, 1st Edition

Originally published in 1993, Medieval English Benedictine Liturgy is a detailed study of the liturgical use of medieval monasteries in England, spanning 500 years. The study examines the major votive observances that came to fruition in the twelfth century and later and argues that these important practices affected earlier monastic observances. The book’s emphasis on Anglo-Saxon liturgy provides a bridge between the practices of the English Benedictines before and after the Conquest. The book also traces the chronological progress of three individual observances and extends where possible into the sixteenth century. The book argues that, at a broader level, while liturgy has been recognized as an indispensable part of the study of the context and use of medieval chant and polyphony.

Note on Citation and Abbreviations

Part I: The Formation of Votive Observance in English Monasteries Before the Norman Conquest

2. The Place of Votive Observance in the First English Benedictine Communities

I: Transcription of Magnificant Antiphonrs for the Little Office of the Virgin from Pentecost to the Nativity of the Virgin in the Worcester Antiphoner

The volumes in this set, originally published between 1938 and 1994, draw together research by leading academics in the area of medieval history and medieval literature, and provide a rigorous examination of related key issues. The volume examines medieval history from the early Middle Ages, right up until the Reformation, as well as the effect of the medieval period on later cultures, such as the Victorians. This collection draws together books on the monarchy, medieval philosophy, religion, art, music, psychology and architecture as well as volumes on medieval archeology. The collection also brings together key volumes on medieval literature of the period, with formative works examining medieval religious literature, medieval legends and oral tradition. The collection also includes titles examining specific poems from the period such as Piers Plowman, Sir Gawain and the Green Knight and The Pearl, as well as volumes on influential writers of the period such as Jean Froissant, John Lydgate and Margery Kempe. This collection brings back into print a collection of insightful and detailed books on the diverse medieval period and will be a must have resource for academics and students, not only of history and literature, but of anthropology, music, psychology and religion.