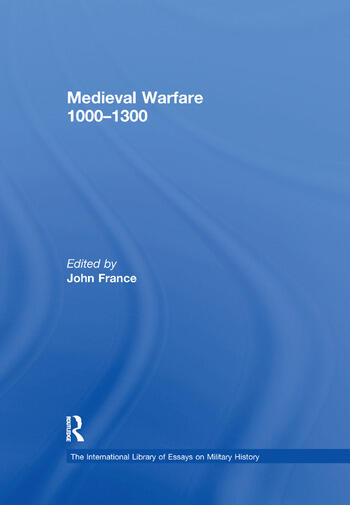 The study of medieval warfare has developed enormously in recent years. The figure of the armoured mounted knight, who was believed to have materialized in Carolingian times, long dominated all discussion of the subject. It is now understood that the knight emerged over a long period of time and that he was never alone on the field of conflict. Infantry, at all times, played a substantial role in conflict, and the notion that they were in some way invented only in the fourteenth century is no longer sustainable. Moreover, modern writers have examined campaigns which for long seemed pointless because they did not lead to spectacular events like battles. As a result, we now understand the pattern of medieval war which often did not depend on battle but on exerting pressure on the opponent by economic warfare. This pattern was intensified by the existence of castles, and careful study has revealed much about their development and the evolving means of attacking them. Crusading warfare pitted westerners against a novel style of war and affords an opportunity to assess the military effectiveness of European methods. New areas of study are now developing. The logistics of medieval armies was always badly neglected, while until very recently there was a silence on the victims of war. Assembled in this volume are 31 papers which represent milestones in the development of the new ideas about medieval warfare, set in context by an introductory essay.

Contents: Introduction; War and finance in the Anglo-Norman state, J.O. Prestwich; The Anglo-Flemish Treaty of 1101, E. van Houts; The mercenary and his master; military service and monetary reward in the eleventh and twelfth century, S.D.B. Brown; An account of the battle of Hattin referring to the Frankish mercenaries in the oriental Muslim States, J. Richard; Arms, armour and warfare in the eleventh century, I. Pierce; Warhorses of the Normans, R.H.C. Davis; Analysis of military forces in the principality of Liège and the country of Looz from the twelfth to the fifteenth century, C. Gaier; The battle of Hastings, R. Allen-Brown; The myth of the military supremacy of knightly cavalry, M. Bennett; Miles in Armis Strenuus: the knight at war, M. Prestwich; The Angevin strategy of castle building in the reign of Fulk Nerra, 987-1040, B.S. Bachrach; Cultural realities and reappraisals in English castle-study, C. Coulson; Trebuchets, D.R. Hill; Towards a re-evaluation of medieval English generalship, J. Beeler; Richard I and science of war in the Middle Ages, J. Gillingham; Hastings, an unusual battle, S. Morillo; The Forty Years War: Toulouse and the Plantagenets, 1156-96, R. Benjamin; A society organised for war - medieval Spain, E. Lourie; Ayn Jalut revisited, R. Amitai-Preiss; The significance and causes of the Battle of the Field of Blood, T.S. Asbridge; The failure of the Siege of Damascus in 1148, A. Forey; The army of Godfrey de Bouillon: structure and dynamics of a contingent on the First Crusade, A.V. Murray; Crusading warfare and its adaptation to eastern conditions in the twelfth century, J. France; Crusader castles. The first generation, D. Pringle; Frankish castle-building in the Latin Kingdom of Jerusalem, R. Ellenblum; The Mahdia Campaign of 1087, H. E.J. Cowdrey; Transportation of horses by sea during the era of the Crusades, J. Pryor; Rate of march of crusading armies in Europe: a study in computation, J.W. Nesbitt; Supplying the crusader states:

John France is based in the University of Wales Swansea, UK, where he is Professor of Medieval History. His specialist areas of study are Warfare and Crusading.

'The selection of articles provides a good overview of different matters in medieval military history with the pieces written by recognized authorities of different eras...a valuable source of information for every scholar and student...' Studia Humaniora Tartuensia '...France's collection is undoubtedly one of prime importance that effectively highlights both older and newer trends in medieval military history. Every essay is valuable in its own right, and scholars of warfare would do well to add this book to their collections.' The Medieval Review '...a major contribution to the study of this topic, republishing some of the most important articles on military history, chosen and introduced by recognized scholars in the field...this volume is a necessary addition to the shelves of any student or scholar of medieval warfare. Essential.' Choice