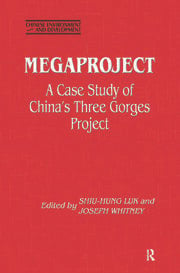 This volume translates crucial Chinese documents on a debate currently raging in China on a proposed project that has enormous implications for its environmental, economic, and social impact - the Three Gorges (Sanxia) Project on the Yangtze River. The most massive water resource project ever planned in China and one of the largest in the world, the Three Gorges Project would cost $1.1 billion to build, would necessitate the relocation of 1.1 million people, would flood a 375-mile-long area and thus destroy some of China's - indeed the world's - most beautiful scenery, and would threaten the extinction of a rare river porpoise. The editors seek to place the arguments in a clear and scholarly perspective that helps to make this book a valuable source of information.

This comprehensive study of the intersection of death and religion offers a unique look at how religious organisations approach death in the twenty-first century. Previous scholarship has largely focused on traditional beliefs an paid little attention to how religious traditions evolve in relation to their changing social context. Employing sociological approach, Death and Religion in a Changing World describes how people from a wide variety faiths draw on and adapt traditional beliefs and practices as they deal with death in modern societies. The book includes coverage of newly emerging social and religious phenomena that are only just beginning be analyzed by religion scholars, such as public shrines, the role of the media, spiritual bereavement groups, the use of the internet in death practices.