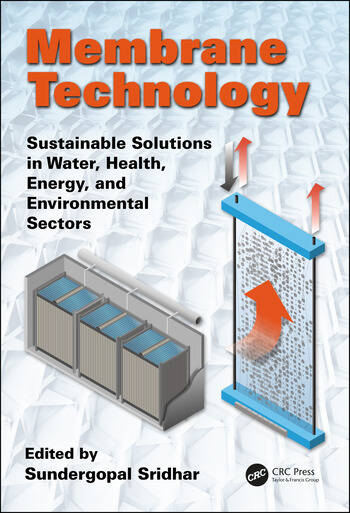 Contributed by multiple experts, the book covers the scientific and engineering aspects of membrane processes and systems.

Dr. Sundergopal Sridhar is a Chemical Engineer from University College of Technology, Osmania University, Hyderabad who has been working as a Scientist in the area of Membrane Separation Processes at the CSIR- IICT, Hyderabad for the past 20 years during which he has developed several technologies for chemical industries besides contributing immensely to rural welfare through water purification projects and academic development via extensive HRD and laboratory development in several schools and colleges.

Major highlights of his career include: (i) Commissioning of several membrane pilot plants based on Electrodialysis, Nanofiltration and Gas Permeation of capacities varying from 500–5000 L/h to facilitate solvent recovery, effluent treatment and gas purification in pharmaceutical, steel, textile and petrochemical industries, and (ii) Design and installation of 15 model defluoridation plants of 600- 4000 L/h capacity and 25 highly compact low cost systems of 100-200 L/h capacity for purification of ground water for more than 2 Million population affected by fluorosis, gastroenteritis, jaundice, typhoid and other water borne diseases in villages of Telangana, Andhra Pradesh and Tamil Nadu, which is widely appreciated by the press, masses and His Excellency, The governor of TS and AP, besides union ministers of science & technology. A free water camp based on compact system design was established by Dr. Sridhar on Uppal Road in Hyderabad city and has been providing healthy water to urban population including pedestrians, drivers of buses, autos, cars and two wheelers, totally free of cost, since April 2016. Similar camps at All India Industrial Exhibition in Jan-Feb, 2017 & 2018 and CSIR Science Exhibition have provided free drinking water to a population of 3 Lakh people including school children.

Dr. Sridhar has published 126 research papers in reputed international journals such as Journal of Membrane Science, and Macromolecules, which are widely cited by peers more than 5600 times in high impact journals with h-index of 37. He has 10 foreign patents to his credit besides 14 Book Chapters and 150 papers in proceedings of various symposia/conferences. Dr. Sridhar has trained 300 B.Tech./M.Tech & M.Sc. students from different universities and institutes for project work apart from guiding 6 scholars for PhD. Dr. Sridhar’s students have been awarded 20 prizes for meritorious work and best oral paper/poster presentation made under his guidance in various conferences / symposia.