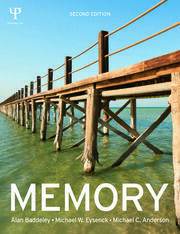 This best-selling textbook presents a comprehensive and accessible overview of the study of memory. Written by three of the world’s leading researchers in the field, it contains everything the student needs to know about the scientific approach to memory and its applications.

Each chapter of the book is written by one of the three authors, an approach which takes full advantage of their individual expertise and style, creating a more personal and accessible text. This enhances students’ enjoyment of the book, allowing them to share the authors’ own fascination with human memory. The book also draws on a wealth of real-world examples throughout, showing students exactly how they can relate science to their everyday experiences of memory.

Key features of this edition:

The book is supported by a companion website featuring extensive online resources for students and lecturers.

Alan Baddeley is Professor of Psychology at York University and one of the world's leading authorities on Human Memory. He is celebrated for devising the ground-breaking and highly influential working memory model with Graham Hitch in the early 1970s, a model which still proves valuable today in recognising the functions of short-term memory. He was awarded a CBE for his contributions to the study of memory, is a Fellow of the Royal Society, of the British Academy and of the Academy of Medical Sciences. In 2012 he was the recipient of the BPS Research Board's Lifetime Achievement Award recognising his outstanding record of personal achievements and significant contributions to the advancement of psychological knowledge.

Michael W. Eysenck is a Professorial Fellow at Roehampton University. He is also Emeritus Professor and Honorary Fellow at Royal Holloway University of London. Within his research he has focused on various topics within memory research (e.g., levels of processing; distinctiveness). However, for many years his research has focused mainly on anxiety and cognition (including memory). He is the best-selling author of a number of textbooks including Cognitive Psychology: A Student's Handbook, 6th Edition (with Mark T. Keane) (2010), Fundamentals of Cognition, 2nd edition (2012), Simply Psychology, 2nd edition (2013) and Fundamentals of Psychology (2009).

Michael C. Anderson was the director of the Memory Control Laboratory at the University of Oregon until 2007. He then moved to the University of St. Andrews, Scotland, where he accepted a Chair in Cognitive Neuroscience, before finally moving to the MRC Cognition and Brain Sciences Unit in Cambridge, England in 2009. Professor Anderson's research on memory control has been featured in Newsweek, US News and World Report, the New York Times, CNN, BBC World News, and the New Scientist.

"This second edition of Memory is, if anything, even better than the first. It is an outstanding coverage of current findings and theories written by top international authors. This edition has more on the brain correlates of memory, and more on lifespan development and memory disorders. It is written in an engaging personal style and may be strongly recommended both as a textbook and as an authoritative up-to-date source for the general reader." — Fergus Craik, Rotman Research Institute, Canada

"The second edition of this excellent text builds on the strengths of the first edition: accessible writing by a team of leading memory researchers that covers both classic studies and new developments. The text seamlessly integrates research from cognitive psychology, neuropsychology, and neuroimaging. I highly recommend this informative and enjoyable text." — Daniel L. Schacter, Harvard University, USA

"The past decade has seen breathtaking leaps in our scientific understanding of human memory, in terms of both behavior and the brain. This text reflects a seamless coordination of effort from three leading memory researchers with complementary interests in different aspects of memory. They manage to present what is known in a thorough, organized, and engaging manner while still conveying the sense of adventure and open-mindedness one needs to appreciate important, unanswered questions about memory that are fundamental to our understanding of what it is to be human." — Nelson Cowan, University of Missouri-Columbia, USA

"I very much liked the first edition of this text. The second edition is even better. The authors have added material, rearranged the chapters so that they flow better, and the result is a wide-ranging textbook that is excels in its coverage of the field. Bravo!" — Henry L. Roediger, III, Washington University in St. Louis, USA

"The first edition of this book was already the best introduction to the topic available. This second, updated and reorganized edition adds an accessible introduction to techniques for exploring memory functions in the brain, and retains the impressive breadth and depth of coverage from the first edition, written by scientists who have made major contributions themselves to our understanding of human memory." — Robert Logie, University of Edinburgh, UK

"I do not know of any memory textbook that covers as many aspects of the topic in such a comprehensive and interesting way for a very broad audience." — Lars-Goran Nilsson, Stockholm University and Stockholm Brain Institute, Sweden

"What distinguishes this delightful and informative book from other textbooks is its eclecticism: it places equal emphasis on data and theory, on typical people and clinical populations, on laboratory experiments and real-world applications, and on methodologies and approaches from experimental psychology and cognitive neuroscience. Best of all, the authors have a historical sensibility while being very up-to-date, which gives the reader a good sense of how the field of memory research developed and where it is heading. I recommend the book enthusiastically." — Morris Moscovitch, Professor of Psychology, University of Toronto and Rotman Research Institute, Baycrest Centre for Geriatric Care, Canada

"The style is accessible, with anecdotes and notable case histories much in evidence, and new paradigms often introduced by an example for the reader to try out. The three authors write clearly, and important terminology is glossed. Graphs and charts present plenty of experimental data but are not obtrusive, and the chapter summaries are a helpful length." — Joe Hickey, Assistant Research Psychologist with Suffolk Mental Health Partnership NHS Trust, UK, in The Psychologist