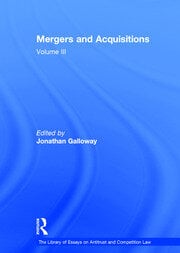 Mergers and acquisitions occur for many legitimate reasons and should be encouraged as a matter of general policy, yet the resulting increase in the level of market concentration and market strength can lead to concerns that certain ’deals’ may irreparably damage the market structure and create anti-competitive effects. This volume explores the competition concerns arising out of mergers and acquisitions, the reasons for merger control and the fundamental options that face all jurisdictions intent on implementing an effective merger control regime. The volume acts as a guide through the development of merger control law, policy and scholarly thought and includes commentary on each of the key stages of any effective merger control regime. The articles consider the objectives of merger control and the broader political landscape within which mergers take place; the procedural issues in merger control, including jurisdictional matters and due process; the different substantive legal standards incorporated into merger control; the relevant theories of harm and the appropriate treatment of efficiencies; and the use of remedies in merger control. The chosen articles mainly, but not exclusively, focus on the US and EU, and several adopt a cross-disciplinary approach encompassing law, political science and economics.