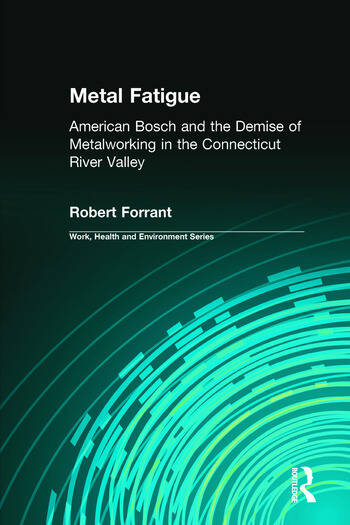 Metal Fatigue: American Bosch and the Demise of Metalworking in the Connecticut River Valley

On February 4, 1986, the lives of thousands of workers changed in ways they could only begin to imagine. On that day, United Technologies Corporation ordered the closure of the 76-year-old American Bosch manufacturing plant in Springfield, Massachusetts, capping a nearly 32-year history of job loss and work relocation from the sprawling factory. The author, a former Bosch worker and the business agent for the union representing nearly 1,200 Bosch employees when the plant closed, interjects his personal recollections into the story.For more than 150 years Springfield stood at the center of a prosperous 200-mile industrial corridor along the Connecticut River, between Bridgeport, Connecticut, and Springfield, Vermont, populated with hundreds of machine tool and metalworking plants and thousands of workers. This book is a historical account of the profound economic collapse of the Connecticut River Valley region, with a particular focus on Bosch, its workers, and its union. The shutdown is placed in the context of the wider region's deindustrialization. The closure marked the watershed for large-firm metalworking and metalworking unions in the Connecticut River Valley. The book also describes how the United States, in a ten-year period from the mid-1970s to the mid-1980s, went from being the world's leading exporter of machine tools to its leading importer, and how that sharp decline affected the region's leading city, Springfield, Massachusetts, which by 2005 was in danger of bankruptcy.

Chapter 1
"You Don't Believe She is Going to Die"
Chapter 1 provides an introduction and overview of story of deindustrialization and its impact on Springfield, Massachusetts and the Connecticut River Valley.

Chapter 2
'A Breeding Ground for Inventors and Skilled Labor': The Valley Flourishes
Chapter 2 traces the growth of machinery building and metalworking along the Connecticut River during the 19th and early 20th centuries. By examining events in Springfield, Massachusetts, and the central role that the Springfield Armory played in developing and diffusing precision machining skills and collaborative relationships among firms in the region.

Chapter 3
American Bosch and Its Workers: An Historical Overview
The third chapter details the history of the American Bosch plant from its construction in 1911 through the early 1950s, and includes a discussion of successful efforts to unionize the plant in 1937, the 1948 sale of the firm to a Wall Street investment company, and the internecine labor battles in the plant in the early 1950s that culminated in the replacement of the plant's original union, the United Electrical Workers, with the International Union of Electrical Workers.

Chapter 4
Work Moves Out: Bosch Doomed in Springfield?
Chapter 4 follows Bosch jobs to Mississippi during the early 1950s and analyzes workers' reactions to the loss of hundreds of jobs and the first inkling of permanent employment insecurity. I detail the elaborate steps managers took to cultivate alternative production sites in the 1950s and early 1960s.

Chapter 5
Skill Was Not Enough: The Bosch Closes
Chapter 5 provides an historical account of events in the Bosch from the 1960s to its closure in 1986. Included here is an examination of the union's failed efforts to develop a community response to the possible closing of the factory.

Chapter 6
Too Many Bends in the River-the Larger Valley's Demise
In Chapter 6 a wider lens is utilized to consider what happened to many of the region's precision metalworking and machine tool firms as the United States went from being the world's leading exporter of machine tools to its leading importer. This story is told through several case studies of firms in Springfield, Massachusetts and Springfield, Vermont.

Chapter 7
The International Association of Machinists, Pratt & Whitney, and the Struggle for Connecticut's Blue-Collar Future
Chapter 7 moves to the southern end of the Connecticut River Valley and considers union-company dynamics between Pratt & Whitney Aircraft and the International Associations of Aerospace Workers. For most of the 1980s and 1990s workers there suffered through several rounds of deep layoffs and the occasional threat by Pratt to cease jet engine manufacturing in the state.

Chapter 8
Staggering Job Loss, A Shrinking Revenue Base and Grinding Decline
The final chapter returns to Springfield, Massachusetts and discusses the City's current financial situation and how its crushing debt is linked to the entire region's massive job loss. Numerous failed economic development schemes, gross mismanagement, and political corruption exacerbated the slump caused by the disappearance of thousands of jobs.