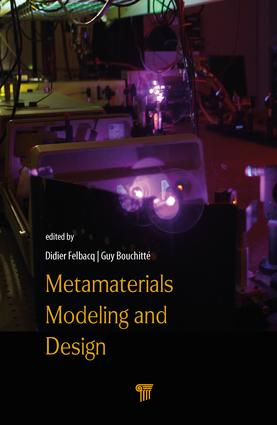 The domain of metamaterials now covers many area of physics: electromagnetics, acoustics, mechanics, thermics, or even seismology. Huge literature is now available on the subject but the results are scattered. Although many ideas and possible applications have been proposed, which of these will emerge as a viable technology will only unfold with time.

This book covers the fundamental science behind metamaterials, from the physical, mathematical, and numerical points of view, focusing mainly on methods. It concentrates on electromagnetic waves, but would also be useful in studying other types of metamaterials. It presents the structure of Maxwell equations, discusses the homogenization theory in detail, and includes important problems on resonance. It has an entire section devoted to numerical methods (finite elements, Fourier modal methods, scattering theory), which aims to motivate a reader to implement them. The book is not written as a collection of independent chapters but as a textbook with a strong pedagogical flavor.

A Review of Natural Materials and Properties in Microwaves and Optics

From Microphysics to Mesophysics: Obtaining Effective Properties from Microscopic Behaviours

Transformation Optics in a Nutshell

Didier Felbacq is a full professor at the University of Montpellier, France. He graduated in mathematics and physics from the Ecole Centrale Paris, France, and Aix-Marseille University, France, respectively. He was appointed associate professor at Blaise Pascal University, France, in 1995, where he founded a group devoted to the modeling and simulation of photonic crystals. He then joined University of Montpellier in 2002, where he formed a group devoted to light–matter interaction in complex media. Dr. Felbacq has been a member of the Institut Universitaire de France (2009–2014) and has authored and co-authored numerous articles in international peer-reviewed journals. He has also written few books and contributed book chapters in some books. Prof. Felbacq is involved in theoretical and numerical research in close collaboration with experimentalists and his current activities cover electron transport in transistors for terahertz emission and detection, second harmonic emission in photonic crystals, excitons in 2D materials, quantum metamaterials, thermal metamaterials, acoustic metamaterials, and water transport in root systems.