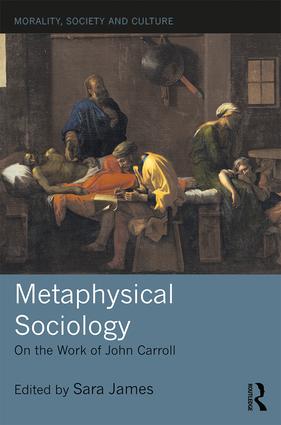 On the Work of John Carroll, 1st Edition

This volume critically engages with the work of the acclaimed Australian sociologist John Carroll. It makes the argument for a metaphysical sociology, which Carroll has proposed should focus on the questions of fundamental existence that confront all humans: ‘Where do I come from?’, ‘What should I do with my life?’ and ‘What happens to me when I die?’. These questions of meaning, in the secular modern West, have become difficult to answer. As contemporary individuals increasingly draw on their inner resources, or 'ontological qualities', to pursue quests for meaning, the key challenge for a metaphysical sociology concerns the cultural resources available to people and the manner in which they are cultivated. Through wide-ranging discussions which include, film, romantic love, terrorism and video games, Metaphysical Sociology takes up this challenge. The contributors include emerging and established sociologists, a philosopher, a renowned actor and a musician. As such, this collection will appeal to scholars of social theory and sociology, and to the general reader with interests in morality, art, culture and the fundamental questions of human existence.

1. What is Metaphysical Sociology? (John Carroll)

2. The Existential Jesus: Transcript of an interview with Stephen Crittenden and John Carroll

4. John Carroll: Towards a Definition of Culture (John Dickson)

7. The Eclipse of Metaphysics (Keith Tester)

9. The Benefit of an Anarcho-Psychological Perspective of Terrorism (Wayne Bradshaw)

Sara James is Lecturer in the Department of Social Inquiry at La Trobe University, Australia. She is the author of Making a Living, Making a Life: Work, Meaning and Self-Identity (Routledge 2017), a major study of the significance of work in contemporary lives. Sara is co-author of Sociology in Today’s World (3rd edition), an introductory sociology text for first-year students, and in 2016 she co-edited a special issue of M/C Journal on authenticity.

The Morality, Society and Culture series invites scholarly explorations of how people in the contemporary world make sense of their lives, and manage to live well.

The series is concerned with studies in Metaphysical Sociology. It focuses on how people create meaningful lives, secure a moral compass, and anchor their identity in complex dynamic modern societies. It explores the contribution of ideas of truth, beauty, and goodness to this.

With metaphysics having taken a cultural turn, opening itself to sociological study and not just philosophical investigation, the series includes works on cultural texts such as novels, films, television programs, music, art, advertising, public events, architecture, video games, and social media, as well as social and economic institutions including work, organizations, markets, households, cities, technologies, and modes of sociability.