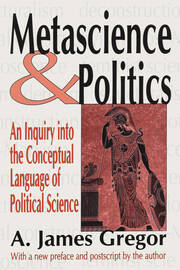 Metascience and Politics: An Inquiry into the Conceptual Language of Political Science

A central problem in political inquiry is the conceptual and linguistic informality of political science. For most of its history, the discipline has been largely pursued with the analytic and logical machinery of ordinary language. Likewise, there has been little effort to standardize how language is used, or to systematize theoretical procedures to insure methodological uniformity. In an effort to better understand and defend the research processes that attend, sustain, and foster the systematic credibility of political science, Gregor argues a special conceptual language is needed to enhance the rigor, replicability, articulation, and interpretation of political science's empirical findings.

Gregor reviews the conceptual inventory of the social sciences in general with particular emphasis on distinctions between descriptive, theoretical, and normative language. He analyzes what might count as "objectivity" and "truth" in a given set of circumstances in an effort to standardize how political scientists make such distinctions. How "theory" and "explanation" might be assessed in less rigorous disciplines is also considered.

Gregor is opposed to the postmodernist tendency to use "language games" in the social sciences that purport to close the gaps separating the discourses of knowledge, ethics and politics, but do so at the expense of clarity, rigor, and objectivity. In Gregor's view, these alternative perspectives have exploited vagueness and ambiguity in order to accomplish what they consider to be their political tasks. A substantial postscript to this edition traces some of the postmodernist perspectives to their origins in the works of particular individuals and to their history in the thought of twentieth-century Europe.

Metascience and Politics attempts to address all these issues, with brevity and seriousness of purpose, in order to provide a defensible rationale for the scientific character of social and political studies. It will be of interest to political scientists, sociologists, philosophers, and intellectual historians.

A. James Gregor is professor of political science at the University of California at Berkeley and an adjunct professor at Command and Staff College, U.S. Marine Corps University at Quantico, Virginia. He has also been awarded the Order of Merit by the President of the Italian Republic for his contribution to Italy as a nation through his published works. He is the author of Giovanni Gentile: Philosopher of Fascism, Interpretations of Fascism, Phoenix: Fascism in Our Time, and Marxism, China, and Development, all published by Transaction.