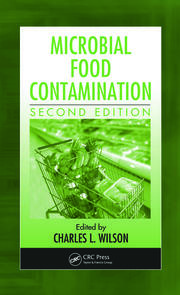 Divided into five parts, Microbial Food Contamination, Second Edition looks at emerging foodborne human pathogens andcomprehensively evaluates the microbiology, biochemistry, detection, risk, and threat of foodborne illness in today’s global market. The first section introduces new insights into the pathogenic effect of E. coli, viral diseases, and protozoan parasites, as well as prions and other zoonotic diseases. It discusses mycotoxins and aflatoxins, particularly the carcinogenicity of aflatoxin B1 and the chemoprevention of liver cancer.

Presenting recent advances in the detection and monitoring of foodborne pathogens, section two reviews rapid electrochemical biosensors, new methods to detect prion diseases, and the use of polymerized chain reaction (PCR) for detection, identification, and typing of microorganisms. Section three examines control and prevention measures including Kosher and Halal food laws, and the use of naturally occurring antimicrobials, irradiation, and other physical control strategies. It also considers the genetic and biochemical control of aflatoxigenic fungi.

Globalization reduces traditional geographic borders that once prohibited pathogens from spreading and increases the risk of transnational outbreaks. The impact of this trend on international trade is evaluated in section four with a look at the implications of mad cow disease on the beef trade. It also provides an overview of programs to mitigate contamination such as the Codex Alimentarius and the International Food Safety Authorities Network.

Addressing the most frightening aspect of microbial contamination, section five explores bioterrorism and the different chemical, radiological, and biological agents that could be employed to deliberately contaminate food. Contributors take a critical look at present food protection strategie