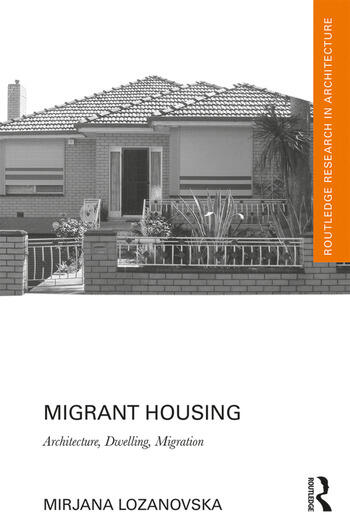 , the latest book by author Mirjana Lozanovska, examines the house as the architectural construct in the processes of migration. Housing is pivotal to any migration story, with studies showing that migrant participation in the adaptation or building of houses provides symbolic materiality of belonging and the platform for agency and productivity in the broader context of the immigrant city. Migration also disrupts the cohesion of everyday dwelling and homeland integral to housing, and the book examines this displacement of dwelling and its effect on migrant housing.

This timely volume investigates the poetic and political resonance between migration and architecture, challenging the idea of the ‘house’ as a singular theoretical construct. Divided into three parts, Histories and theories of post-war migrant housing, House/home and Mapping migrant spaces of home, it draws on data studies from Australia and Macedonia, with literature from Canada, Sweden and Germany, to uncover the effects of unprivileged post-war migration in the late twentieth century on the house as architectural and normative model, and from this perspective negotiates the disciplinary boundaries of architecture.

Mirjana Lozanovska is Associate Professor at Deakin University, Australia. Her research deploys multidisciplinary theories of space to examine mobility and exchange and its impact on architecture, diversity and culture, and the reinvention of the city. She has published widely on migration and architecture, and is editor of the anthology, Ethno-Architecture and the Politics of Migration (2016).

"Tracing the post war emigration of unprivileged migrants to affluent economies, Lozanovska’s Migrant Housing expertly uncovers human networks and material conditions otherwise neglected in architectural studies, powerfully demonstrating the built environment’s capacity for recording and representing the migrant condition. Her captivating metaphor of the ‘twin house’, imagined, created and adapted in sending as well as recipient sites conjures a transcultural poetic across national borders that emerges as equally viable and intellectually stimulating as other situated representations of home or dwelling."

"Two distant places — the village of Zavoj (Republic of Macedonia) and the suburbs of Melbourne (Australia) — are tied together through the will, aspiration and luck of migration. As ties between them thicken and thin over time, the homes and neighbourhoods in each place expand and contract. Migrant Housing builds a compelling account of this unlikely reciprocity, and weaves around it a rich and far-reaching set of reflections on migration and its formative role in shaping contemporary cities".

"This multidisciplinary and cross-cultural research makes a major contribution to architecture and migration studies."