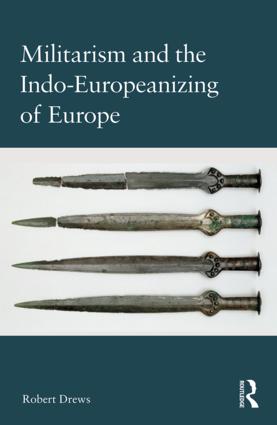 Militarism and the Indo-Europeanizing of Europe

This book argues that the Indo-Europeanizing of Europe essentially began shortly before 1600 BC, when lands rich in natural resources were taken over by military forces from the Eurasian steppe and from southern Caucasia. First were the copper and silver mines (along with good harbors) in Greece, and the copper and gold mines of the Carpathian basin. By ca. 1500 BC other military men had taken over the amber coasts of Scandinavia and the metalworking district of the southern Alps. These military takeovers offer the most likely explanations for the origins of the Greek, Keltic, Germanic and Italic subgroups of the Indo-European language family.

Another current opinion is that the Indo-Europeanizing of Europe happened long before 1600 BC. The "Kurgan theory" of Marija Gimbutas and David Anthony dates it from late in the fifth to early in the third millennium BC and explains it as the result of horse-riding conquerors or raiders coming to Europe from the steppe. Colin Renfrew’s Archaeology and Language dates the Indo-Europeanizing of Europe to the seventh and sixth millennia BC, and explains it as a consequence of the spread of agriculture in a "wave of advance" from Anatolia through Europe. Pairing linguistic with archaeological evidence Drews concludes that in Greece and Italy, at least, no Indo-European language could have arrived before the second millennium BC.

Today’s archaeology, exemplified by the work of, for example, Helle Vandkilde or Kristian Kristiansen, is again interested in Indo-European migrations, war, weapons, and the flow of interaction throughout the Old World. Drews has studied these issues, through the lens of Near Eastern and ancient Greek history, throughout his career and across shifting trends in history and archaeology. Militarism and the Indo-Europeanizing of Europe draws on this experience to produce a synthesis from Caucasia to Scandinavia; to address at length topics previously remarked on in passing; and to comment on a number of current debates about the role and nature of militarism, warfare, chronological issues, Indo-European dispersions, the arrival of the Greeks in Greece, and the history of Europe.

"Drews’s conclusions will, no doubt, engender a vigorous response from PIE scholars over the merits of his thesis. Regardless, Militarism and the Indo-Europeanizing of Europe is a fascinating read for the student of warfare or antiquity, even without a background in archaeology, linguistics, or Indo-European studies."

1 The Origins and Spread of Proto-Indo-European

2 The Kurgan Theory and the Taming of Horses

4 Chariot Warfare, the Beginning of Militarism, and its Indo-European Connection

5 The Beginnings of Militarism in Temperate Europe

6 The Beginning of Militarism in Greece

7 The Question of Origins

Robert Drews studied ancient history—Near Eastern, Greek and Roman—at the Johns Hopkins University and received his degree in 1960. For the next 45 years he taught the full slate of ancient history at Vanderbilt University, and became interested especially in the evolution of religion and of warfare. In the latter field his publications include Coming of the Greeks (1988), The End of the Bronze Age (1993) and Early Riders: The Beginnings of Mounted Warfare in Asia and Europe (2004).