Military Advising and Assistance
From Mercenaries to Privatization, 1815–2007 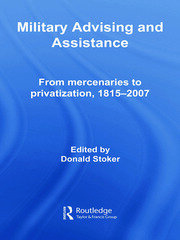 Military Advising and Assistance: From Mercenaries to Privatization, 1815–2007

This volume presents a number of case studies of military advisors and missions in order to provide clear historical examples of the evolution, functioning and motives of foreign military advising in the modern era.

Containing essays by US contributors covering a wide range of countries and spanning nearly 200 years of history, the case studies show the evolution of foreign military advising from ill-organized mercenary units, to professional, government-sponsored teams driven by a desire to cultivate political and economic influence, to Cold War tools for pursuing ideological aims, nation building, and modernization, to post-Cold War elements of alliance integration. Finally, the book highlights the increasing present-day role of private corporations, some of which provide complete military forces, thereby bringing the evolution of foreign military advising full circle.

This book will be of interest to students of military history, civil-military relations, peacekeeping, security studies and political science in general.

Donald Stoker is Professor of Strategy and Policy for the US Naval War College’s Monterey Program. He is the author of Britain, France, and the Naval Arms Trade in the Baltic, 1919-1939: Grand Strategy and Failure (Frank Cass, 2003).