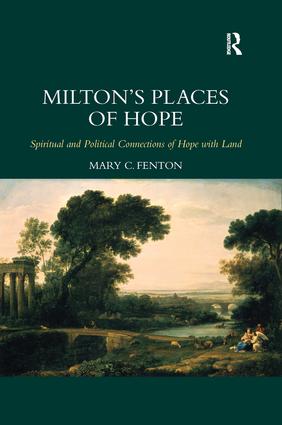 Spiritual and Political Connections of Hope with Land, 1st Edition

In early modern culture and in Milton's poetry and prose, this book argues, the concept of hope is intrinsically connected with place and land. Mary Fenton analyzes how Milton sees hope as bound both to the spiritual and the material, the internal self and the external world. Hope, as Fenton demonstrates, comes from commitment to literal places such as the land, ideological places such as the "nation," and sacred, interior places such as the human soul. Drawing on an array of materials from the seventeenth century, including emblems, legal treatises, political pamphlets, and prayer manuals, Fenton sheds light on Milton's ideas about personal and national identity and where people should place their sense of power and responsibility; Milton's politics and where he thought the English nation was and where it should be heading; and finally, Milton's theology and how individuals relate to God.

'Fenton deftly brings together historicist and theological, literary and political, material and spiritual perspectives to illuminate Milton’s fundamental (though hitherto unexplored) preoccupation with hope.� … Not the least of the virtues of this excellent book is that it rejects easy dichotomies between Old� and New Testament� perspectives, and between spiritual and material concerns. This rich, fascinating book makes us think about Milton ” and his culture ” in a different way.' Achsah Guibbory, Barnard College 'Providing a fascinating context for concept of "hope" in the history of thought, this book does a superb job of demonstrating the crucial bearing of that concept on John Milton’s writings. As Professor Fenton argues, hope underlies Milton's views concerning not only liberty, reform, and politics, but also is an essential constituent of his religious beliefs. Moreover, the connection that this study draws between hope as a virtue and the notion of place is a welcome addition to our understanding of Milton's mind and art.' Michael Lieb, University of Illinois at Chicago 'The original meaning of hope is land - the Old English word "hop" means a secluded valley or a remote enclosed space. From this etymological seed Mary C. Fenton's wide-ranging and wonderfully imaginative book expands to offer its readers an unusual and richly stimulating contemplation of "hope" as a key concept in understanding both Milton's public and private identity. Ranging from Giotto to Heidegger, Milton's Places of Hope is a fascinating and often strikingly original work of associative thinking.' Paul Stevens, University of Toronto ’All students of Milton will find much to engaged them in Milton's Places of Hope, as will readers interested in the intersection of biblical ideas and radical politics in the seventeenth century. Throughout the book, I especially admired its author's alertness to Milton's etymologically charged and densely enmeshed langu

Contents: Introduction; Hope, land ownership, and 'The Paradise Within'; Keeping Irish hope in its place: charity, 'Reduction', and reform; Place, hope, and prayer; Our father who art in hell: complicating hope; Confiscating prayer; Myself am paradise: hope, land, and redemption in Paradise Regain'd; Epilogue; Index.

Mary C. Fenton is Professor of English at Western Carolina University, USA, and a recipient of the University of North Carolina Board of Governors' Award for Excellence in Teaching. She has published widely on Milton in such places as Milton Studies, Milton Quarterly, and SEL.